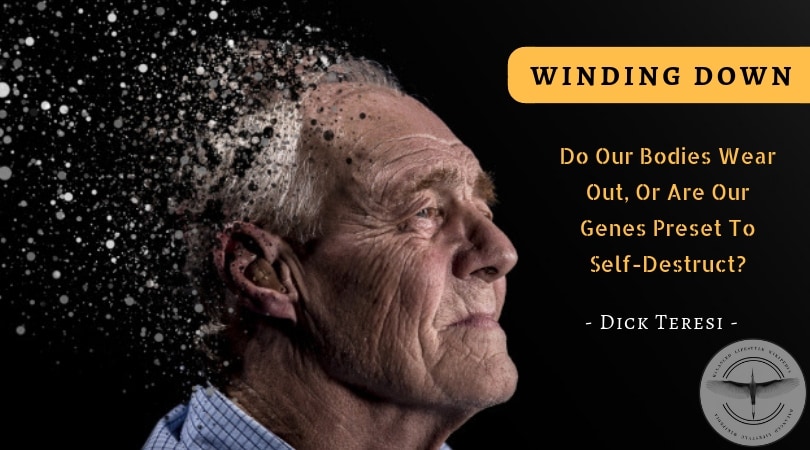 Author (Dick Teresi) Bio: Dick Teresi is the author or co-author of several books about science and technology, most recently The God Particle and Lost Discoveries: The Ancient Roots of Modern Science, both selected as New York Times Book Review notable books. He has been editor in chief of Science Digest, Longevity, VQ, and Omni, of which he was also a cofounder, and has written for The New York Times, The Wall Street Journal, Smithsonian, The Atlantic, and Discover, among other publications.

Do Our Bodies Wear Out, Or Are Our Genes Preset To Self-Destruct?

While a breakthrough drug or therapy to extend life remains a far-off fantasy, scientists are making headway tracking down clues to another mystery: Why do we age? What is it that builds up, goes awry or is depleted, causing the changes in physiology that we interpret as aging?

It is unlikely that these researchers will stumble on some magical potion or secret of perpetual youth, but they may make discoveries that will allow our biological functions to run more efficiently and avoid breakdowns. Their findings may slow some aging processes.

Scientists from the Soviet Union to California are testing various theories, taking care to separate what is cause and what is merely effect. Some of the so-called causes of aging put forth by researchers today may turn out to be only superficial signs of a more important mechanism tomorrow. It would be silly, for instance, to say that gray hair causes aging. Someday, when more is known about the processes of senescence, the following ideas may be absurd

Scientists prefer to call this the “stochastic” theory. A more dignified name, but essentially this hypothesis holds that our bodies are like any major appliance and they wear out. (A stochastic system is a random system, one that breaks down by chance, like an old refrigerator.) This very popular theory comes in many forms and is easy for the layperson to grasp: The body is like a Volkswagen; the clutch goes, the head gasket warps and eventually it dies in a pool of oil. There’s only one problem: Human beings are neither appliances nor automobiles. On the positive side, we have cells that replicate and refrigerators do not. On the negative side, sure, cars wear out, but we can intervene quite effectively to extend their maximum life spans, something we can’t do with humans. The average life expectancy of an automobile is somewhere around eight years or 100,000 miles. Yet my neighbor has a ’32 Ford in mint condition that runs like a top. All it takes is perfect maintenance. A 1932 Ford on the road today is equivalent to a 534-year-old human, since it has exceeded life expectancy for its species by more than seven rimes.

A much more intriguing, and more modern, concept is that there’s a genetic program somewhere in the body that dictates how fast (and in what manner) each of us will age and die. It has yet to be found, but some researchers speculate that this DNA clock might be contained in each cell, perhaps in a supergene, while others believe it resides in the brain. In fact, people have been aging and dying like clockwork for many millennia, so it’s not too farfetched to believe that a hard-wired mechanism controls this genetic process.

This theory takes many forms, but it’s basically a cross between the stochastic and clock of aging concepts. The basic idea is that the genetic code that controls the production of the cells’ proteins goes awry. There are two ways of looking at this: Either wear and tear damages the genetic machinery and causes these errors (stochastic theory) or, for some reason, the “errors” are built in to the gentic code (the clock of aging theory).

The error catastrophe theory has been “pretty much demolished,” according to Dr. Robert N. Butler, Brookdale professor of geriatrics at Mt. Sinai School of Medicine in New York City, as old cells now appear to do as well as young cells when it comes to protein production. It was a very useful theory for many years, however, as it spurred scientists to study the whole area of proteins and genetic error.

This one was dreamed up by the noted gerontologist Alex Comfort, better known for his book The Joy of Sex (Pocket Books, 1987). Think of it in this way: Take a page of your favourite magazine and photocopy it. Then photocopy your photocopy. Now make a photocopy of the second photocopy, and so on. By the 50th copy, you will have a blurry mess. Likewise with cells, says Comfort. Every time they replicate, the new copy of DNA gets more and more smudged. Comfort reportedly has since pulled away from this notion, which in fact is a variation on error catastrophe.

When the immune system rebels, responses may be as trivial as hay fever, as painful as rheumatoid arthritis or as deadly as lupus. In this theory, aging and death are part of one, big autoimmune disease, in which the immune system becomes confused and starts attacking the body’s own cells.

A person’s fate depends on whole families, or “suites,” of genes, say some experts. “Unless all members are perfect, you won’t live as long or as well as you should,” says Joan Smith-Sonneborn, who chairs the program on aging and human development at the University of Wyoming in Laramie.

Smith-Sonneborn’s experiments show that there may be a way to clean up accumulated DNA damage in imperfect genes. Many years ago, she made a landmark discovery in aging research when she bombarded single-cell organisms called paramecia with ultraviolet light, then shoved them under black light. The dark was known to trigger an enzyme that repaired the DNA damage caused by sunlight. What Smith-Sonneborn discovered was that these paramecia lived 50 percent longer than untreated paramecia did.

It’s the trendiest idea around, but in reality, the free-radical theory is simply an elegant variation on the stochastic theory. Namely, there are chemical agents called free radicals that wear down our bodies.

Another hot theory holds that blood sugar interacts with proteins manufactured by the body’s cells and distorts the genetic information. Furthering this notion is the fact that diabetics who have difficulty metabolizing sugars often contract age-related diseases such as cataracts and atherosclerosis while they are still relatively young. Edward J. Masoro of the University of Texas Health Science Center at San Antonio recently found that long-lived rats in dietary-restriction experiments have low blood glucose, thus bolstering the glycation (from the word glucose) hypothesis even more.

Let’s finish up with a fun theory. It goes something like this: There’s one part of us that lives forever – DNA, the master molecule of heredity. Human DNA doesn’t want to die, so it keeps the species alive as best it can and is passed from generation to generation.

Individuals, however, are expendable. Because a species must mutate or change to keep pace with a changing environment, and because this evolution is slow, it’s in that species’ best interests to turn over generations as quickly as possible so that favorable mutations will show up in the gene pool.

This is the thinking behind the rather wild theory that there is a “death hormone,” a substance, possibly secreted by the pituitary gland, which ages us and eventually kills us. For if we lived too long, we would hold up the process of evolution.