What Not To Tell The One You Love? 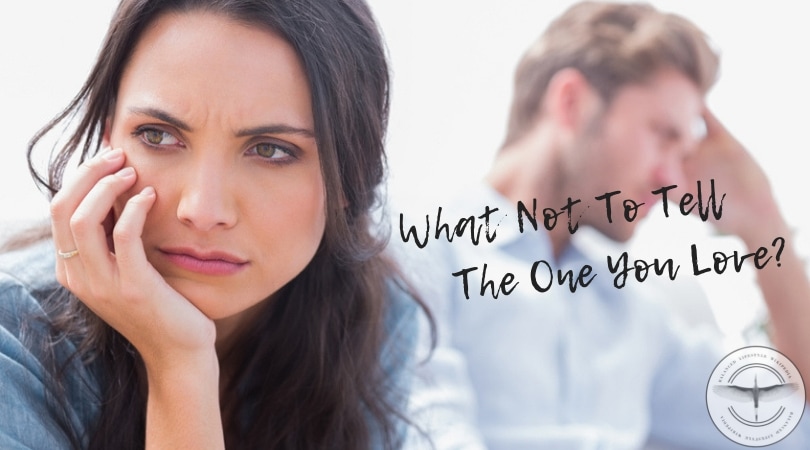 A widely held belief about love and marriage is that partners should be totally open and honest with each other. We think that it is a sign of trust and genuine sharing to hide nothing from the one we love. But surprisingly, many marriage therapists and other experts in human relationships doubt that it is genuinely loving, wise – or moral – to be totally honest. On the basis of clinical experience and psychological expertise, they say that at times there are certain thoughts and feelings that you should keep to yourself or even lie about, if you truly love your partner.

Do you know what – and what not – to tell the one you love? And when? Test your own wisdom about love and honesty by answering these questions. Then see the conclusions of the distinguished panel of experts.

The modern view holds that there should be no secrets or lies between intimate partners. The panelists took the more complicated but common-sense position that the circumstances determine whether total honesty is wrong or right. Karl Scheibe pointed out that “fidelity to another person requires discretion, tact, protection, kindness, forbearance and sensitivity. These requirements are more complex than the simple principle of always telling ‘the truth’.” On the other hand, lies and secrets can easily create distance between partners. One must carefully weigh each case.

Here’s how the panel applied these principles:

1.       Mrs. A can’t do anything about the fact she’s short. For Mr. A to reveal his feelings would hurt her. Mr. A may have to elaborate the truth to meet his wife’s needs. Ray Fowler suggests an answer: “If I wanted someone like that, I’d have married someone like that. I didn’t I married you, and I love you as you are.” Several panelists said that Mr. A should stress the qualities in his wife that mean more to him than long legs.

2.       Almost all the panelists agreed that Mrs. B should tell Mr. B how she feels about his eating habits. Several suggested that they’re faults he could correct, with good results for both of them. But as Ellen Berman pointed out, “The really tough part is how and when to tell. Not at an intimate, vulnerable moment. Not when the other person is already ‘down’. Not in middle of an ugly fight.” Robert Whitehurst stressed that “she should time it when he can handle it, when he’s feeling good about himself and the two of them.”

3, 4 and 5. In all three cases, the problem is one of a flaw in the relationship that might be corrected or compensated for. Mrs. C may be wrong that her sex drive is naturally low. Her husband ought to tell her how he feels and suggest that they seek professional help. Her sex drive might be increased or, as Albert Ellis noted, she might discover that “she could more enthusiastically and adeptly try various sex acts that will give both of them more pleasure.” But Ellis warned that telling such a truth is a good idea only if the wife is rational and realistic: “If she’s a strong self-blamer, he had better keep quiet.”

Nearly all panelists agreed that Mr. D should tell his wife how her public criticism makes him feel, though carefully choosing how and when he does so. Angrily expressing resentment often yields only a pitched battle.

Mrs. E may get her husband to relax – and share – his control of the family finances if she tells him how she feels without making it an all-out attack. As for getting him to lend a hand with household chores, Evelyn Duvall commented: “She should suggest one simple task she would like him to do, then express her appreciation for his help.” And take it from there.

6. The panel disagreed on this one. Several said that it was fine for Mr. F to have private thoughts about being a young single as long as they didn’t affect his wife’s well-being or his feelings for her. There’s a difference between secrecy and privacy, and no matter how intimate two people are, each deserves some private space. Most of those who said Mr. F should tell the truth said he should do so in a harmless way. Marcia Lasswell’s suggestion: “He could say, ‘I wish I were eighteen again.’ ”

7. Mrs. G should not tell about her sexual fantasies. Frederick Humphrey commented: “Sexual fantasies of this kind are often devastating to the other partner. Let Mrs. G enjoy her fantasies – privately.”

8. most panelists said that Mr. H should either bear the burden of his guilt about his affair or seek professional help. It could be unwise and unfair to shift his burden on to his wife. Tilla Vahanian commented: “Although the truth is rarely as painful as the barrier created by secrets, if the only reason to the reveal something is to unburden oneself without regard to the impact on one’s mate – as in this case – staying quiet may be more responsible.” David Mace added: “The ethic of honesty must always be subservient to the ethic of love. Where the confession of sexual infidelity might be devastating to the partner, the unfaithful partner should discuss the matter with a counsellor who can help him or her decide whether to confess.”

9 and 10. In both cases, many panelists felt that the truth need not be told. But one panelist said that the secret of the homosexual experience might have some bearing if Mr. K still has homosexual yearnings. Then the truth should be told to avoid future problems.

12. This may be the most difficult case of all. Most panelists felt that Mr. O should tell Mrs. O how he feels, but some felt strongly that he should not tell her the full extent of his misery. Said Marcia Lasswell: “He ought not add to her burden – but she’d think something was wrong if he showed no apprehension or sorrow.” Karl Scheibe was more emphatic: “He should do all in his power to make her last year as happy as possible. She’ll understand that he’ll be grieved. He needn’t make her share the full force of his pain.”

Summing up the question of what – and what not – to tell the one you love, Douglas and Lynelle Hale-Sprenkle said: “It is not so much a case of whether to be truthful, but when and how – and in what way to be most loving.”