The Food Packers Are Starving You 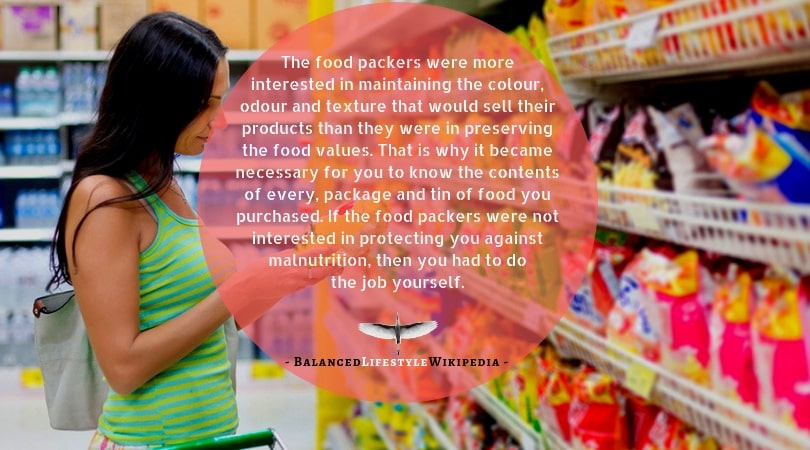 When men lived upon the land and based their diets on food grown naturally, in the manner intended by nature, they were not faced with the problems and confusion of modern nutrition. Only when they moved from the farms into the cities and ceased to grow their own food supplies from soil which they themselves tended, did they face the dangers of devitalized foods and static diets. For it was then that the food packers, with their mass; production and distribution, stepped into the scene.

The food packers were faced with the problem of growing and supplying large populations with food, and doing this at a profit. To sell their food, they made a great effort at “prettifying” it, appealing to the eye, rather than the stomach. They would add bicarbonate of soda to green vegetables to heighten the colour. They dyed oranges and grape-fruits to give them that ripened look. Preservatives were doused upon jams and jellies, breads and cakes, meats and cheeses, to halt spoiling in transit and storage. The bicarbonate added nothing but colour to the vegetables and stole much of the vitamin value. The yellow and orange dyes did not better the green, unripened fruits. And, while the preservatives helped to avoid spoiling, they also, as in the case of white bread, contributed to poisoning your body and destroying your mind.

In Great Britain the indiscriminate use of preservatives in food led to the passing of the Food and Drugs Act of 1938. Among the chemicals with which it used to be possible to adulterate any articles of food were benzoic acid and sulphur dioxide. Even today it is still possible to add these substances in limited quantities to certain items of diet. For example, benzoic acid may be added to chutney, fruit cordials, mineral waters, pickles and sauces, while beer, jams, marmalade and sausages are allowed to contain a certain proportion of sulphur dioxide.

Another chemical preservative in common use is potassium nitrite, which may be added to bacon, ham and cooked meats. It is known that potassium salts tend to act with a depressant effect upon the heart and nervous system.

Fortunately the law does not permit any preservative to be added to butter and milk, but alum, another potassium salt, may be added to baking powders. Alum is a sulphate of potassium and aluminium – and about the harmful effect of aluminium we shall have something to say in another article ‘Is Your Cockware Toxic? Copper and Aluminium – The Menace of Modernism’.

Many other chemical agents contained in processed and packaged foods are detrimental to human health. Emulsifiers, for instance, chemicals used by bakeries to give bread that “more tender” feeling and thus trick the public into believing this baked food to be fresher than it actually is, were found to dilute the nutritive value of foods and present the possibility of actual poisoning. The American Medical Association took the position that so long as these emulsifiers cannot be proved to be harmless, they should not be used in any foods.

Why did such a horrifying condition exist?

The food packers were more interested in maintaining the colour, odour and texture that would sell their products than they were in preserving the food values. That is why it became necessary for you to know the contents of every, package and tin of food you purchased. If the food packers were not interested in protecting you against malnutrition, then you had to do the job yourself.

The greatest sin committed by the large food packers of the nation in their endless attempts to produce bigger and more colourful-looking foods is their complete indifference to the conditions of the soil from which our food is produced.

More recently, the packers have shown an increased interest in nutrition. In America large research institutes have been endowed by the packers for purposes of analyzing and grading food products. None the less, the earlier philosophy of eye-appeal over food value still exists too widely for you to be able to purchase food indiscriminately.