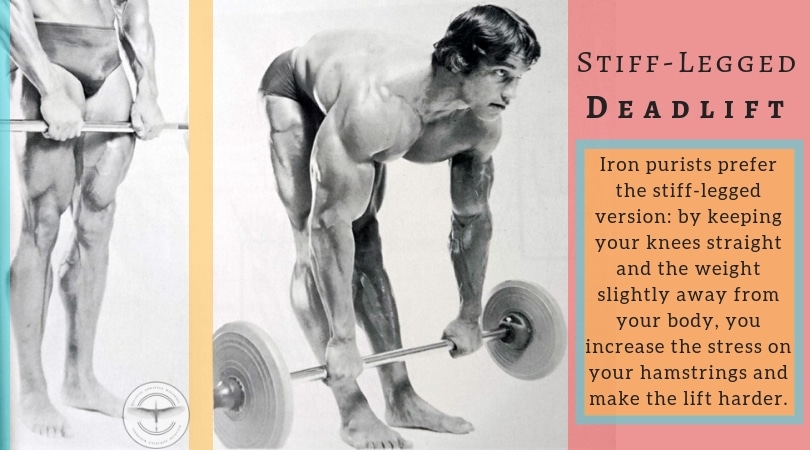 Not to be confused with its slightly bent-knee cousin the Romanian deadlift, the stiff-legged deadlift is, as its name suggests, the knees-straight version of this popular hamstrings exercise. That being said, a lot of confusion surrounds the proper execution of both lifts. Let’s settle the matter once and for all.

Both the stiff-legged and Romanian “deads” are used to train the hamstrings (biceps femoris, semitendinosus and semimembranosus), exploiting that muscle’s insertion above the hip joint. As such, they play a major role in extending your hips, which occurs whenever you bring your upper legs from in front of your body to directly underneath or behind it. Most often, of course, hip extension is thought of as something that occurs during squats or dedicated glute exercises. Your next question should then be, “How does either of these deadlifts affect my hamstrings if all I’m doing is bending over and coming back up?”

Thought you’d never ask. Here’s the deal: if you perform either lift correctly, your spine should never flex forward. If your back does round, your body’s major pinot point shifts from your hip joint to the smaller joint structures within your spine, turning an excellent hamstrings exercise into a low-back killer. What’s more, you decrease the resistance being applied to your hams. So the goal is to always keep your spine in its natural, fully erect position. For both the stiff-legged and Romanian versions of the deadlift, movement should occur only at the hips and pelvis.

Now that we’ve addressed the similarities between these two lifts, let’s examine the differences. When performing the Romanian deadlift, your knees will remain slightly bent throughout, which shortens your hamstrings. You also want to keep the bar next to your thighs and shins, which decreases resistance and helps you maintain your balance. The net result is that you shorten the distance between the weight and your centre of gravity. That’s exactly why iron purists prefer the stiff-legged version: by keeping your knees straight and the weight slightly away from your body, you increase the stress on your hamstrings and make the lift harder.

To get this exercise right, follow these six simple steps: