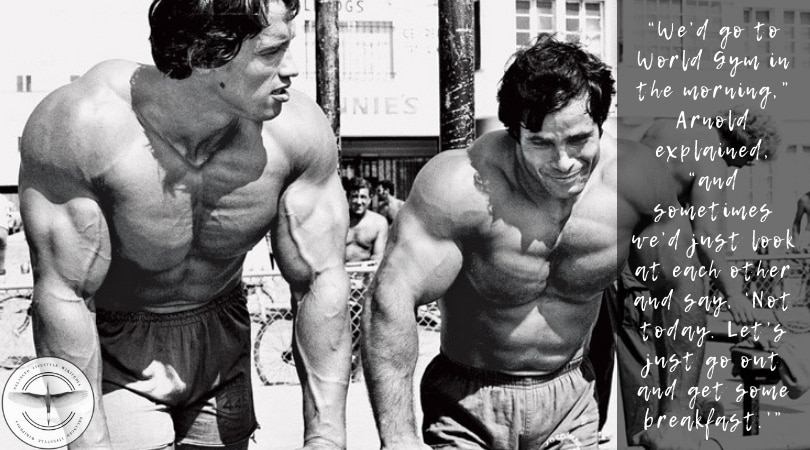 HOW TO AVOID ONE OF BODYBUILDING’S MOST COMMON MISTAKES

Don’t look now, but something seems to have gone terribly wrong with the way some bodybuilders are training nowadays. Physique competitors have always tended to believe that more is better and nothing succeeds like excess. But this “too much of a good thing” philosophy has got completely out of hand. Phenomenal physiques shrink and shrivel, depleted by too much training, too many hours of cardio and too little nutrition. Giants turn into pygmies. Prime cuts become chopped steak. Athlete who once looked like they belonged in Pumping Iron ended up as candidates for Holby City.

There’s no doubt that many bodybuilders are still overtraining. They are training too long, too often and not giving themselves sufficient time to rest, recuperate and recover. As a result, they aren’t getting maximum results from their workouts.

The key to making progress is intensity of effort – that is, being able to demand 100% of what a muscle is capable of. Intensity of effort is what stimulates growth. But growth stimulation is not the same as growth production. Growth stimulation (what you do in the gym) sets off a chain of reactions that eventually leads to growth production – but that occurs later in the recovery stage. So, giving yourself ample time to recover and grow is essential in your training formula.

Here’s another way to look at it: the level of intensity of your workout determines how much growth is stimulated. But actual growth occurs in the period of rest and recuperation that takes place between your workouts. So to create extra growth, you don’t extend the duration or frequency of your workouts – you increase the period of rest and recuperation. In other words, you train very hard for relatively short periods of time. Then you leave the gym, allow your body to rest and recover, and don’t come back until that process is complete.

The recovery process is not a simple one. You’re dealing not just with the recovery of individual muscles, but systemic recovery as well. This involves any number of different metabolic processes and is too complicated to go into here. But suffice it to say that whether or not you feel tired is not necessarily a true indication of whether you are fully recovering from your workout. You can, in fact, condition yourself so that you continue to feel okay even though you are working out too long and too often and not getting maximum results and growth from your training.

And that is exactly what most bodybuilders do. Instead of training for maximum muscular development, they put a conflicting demand on their bodies, asking for muscular growth and a lot of endurance adaptation as well. They do make some progress, but not nearly as much as they could if they didn’t overtrain. But since they are making some progress, they believe their programme is a good one. As they get closer to a contest and want to increase the intensity of their workout, they tend to train longer and more often, pushing the level of overtraining past the point where their bodies can adapt to it, and then wonder why they appear small, flat and depleted.

Unfortunately, bodybuilders over the years have got a false idea about how the body actually works. Talk to competitors immediately before a contest (or people simply training seriously in the gym) and they are likely to have all sorts of theories about what the body will do if they limit or increase their carbs, drink more or less water, sodium deplete and so forth, as if the body were a simple mechanism that responds in a one-to-one, linear manner to factors such as exercise and diet.

But it doesn’t. Feed rat excess calories for 24 hours and it will gain weight. Feed human being excess calories for 24 hours and he or she might (1) gain weight, (2) lose weight or (3) stay at the same weight. The human body doesn’t balance its accounts on a daily basis as a rat’s does. So, trying to trick the body into “peaking” for a contest on a given day, even a specific hour, is a losing proposition. It’ll do what it wants to do, in the way it wants to do it, maybe differently each time; you have to try to create a stable “peak condition” that lasts for days or more if you want to have a good chance of looking your best for a contest or even a trip to the beach.

This idea also holds true for training. Bodybuilders have managed to create impressive physiques because they have uncovered the underlying “programming” to which the muscles are genetically predisposed to respond. And that programming is very specific. The body doesn’t care what you think you’re telling it to do. You either punch in the right codes – that is – train in such a way that maximum stimulation to the muscles is created – or you don’t. Full stop. Nothing else will allow you to approach your true genetic potential for muscular development.

Once you understand this, the problem becomes how to determine the minimum number of sets it takes for you to stimulate maximum growth. If you do one set more than the least amount required to stimulate growth, you’re not just wasting time, you’re limiting the growth process itself. It’s like getting a suntan. Once you’ve got enough sun to stimulate maximum tanning response from the skin, any additional exposure, even one minute, causes your skin to burn rather than tan. You cease to overcompensate and begin to decompensate – which in the case of exposure to ultra-violet radiation leads to burning, blistering and even death.

Similar principles are involved with exercise. When the intensity is sufficient, achieving the necessary stimulation doesn’t require long periods of exercise or excessive numbers of sets and repetitions. Once the right signal is sent to the nervous system a sufficient number of times to stimulate growth, any additional exercise stress on the body begins the process of decompensation, not overcompensation.

Determining how much training is enough is a matter of trial and error. A bodybuilder should see how his or her body responds to only one set, and then try two, three or more, each time assessing results before deciding to go on to add more sets to the workout. Of course, most bodybuilders would find this process difficult. But it’s certainly clear that spending more than 30 to 40 minutes working a major bodypart is counterproductive, and that smaller bodyparts such as biceps and triceps require even less training than this.

Actually, this is one area in which bodybuilders have begun to realise the truth. This is why a lot of bodybuilders nowadays are choosing a 4-day workout programme instead of a 3-day split. Spreading the same amount of training out over an extra day lets them train harder for shorter periods of time, increasing the intensity of their workouts while helping them avoid the “decompensation limit”.

Shorter but high intense workouts are better. However, a 4-day cycle with one day of rest might still be more than an individual body can handle, assuming that he or she is training with maximum intensity. Some people simply recuperate faster than others. A more realistic schedule for many, especially during the off-season, would more likely be something like two days on, one off, two days on, two off, which means training only four out of seven days and working each bodypart only once a week.

A FINE LINE BETWEEN GROWTH AND STAGNATION

To make strides in muscle growth, you have to walk a fine line between pushing yourself and pushing yourself too far. The key to making continual gains while avoiding the crash and burn is recognising when you’re in danger of crossing the line. If you’re overtrained from lifting at too high an intensity – too heavy and hard you may notice that your resting heart rate is increased, your heart takes longer to return to normal after exercise, you have trouble sleeping, you sweat more and your emotions are a bit off. If you’re overtrained from lifting with too much volume – too many sets and reps and/or lifting too often – you may have a decreased resting heart rate, faster recovery in your heart rate after exercise, digestion problems, fatigue and lower blood pressure.

Hold On To Your Heart

The earliest sign of overtraining will show up in your heart. The best way to monitor this is to check your heart rate first thing every morning. Upon waking, lie in bed for one full minute, then take your resting pulse. If it’s elevated or depressed by five beats per minute or more for two consecutive days, it’s time to cut back, drastically, on the intensity or volume of your workouts.

IF IT WAS GOOD ENOUGH FOR ARNOLD…

While working on his Encyclopedia of Modern Bodybuilding, Arnold Schwarzenegger often brought up the fact that he and Franco Columbu used to train six days a week, usually twice a day – far too much by modern standards – but they took days off whenever they felt too tired and drained to get a good workout.

“We’d go to World Gym in the morning,” Arnold explained, “and sometimes we’d just look at each other and say, ‘Not today. Let’s just go out and get some breakfast.’”

Certainly, nobody could ever have accused Arnold or Franco of being lazy. They were two of the hardest trainers in the history of the sport. But they were also very smart when it came to listening to what their bodies had to tell them. Push a tired body too far, they both understood, and you not only don’t make progress, but you increase your risk of injury.

If he were training for competition today, it’s likely that Arnold would train less often than was the fashion in the 1960s and 1970s. Nor would he likely insist on training any bodypart three times a week, as was often done back then. But one thing is sure: he’d still be very sensitive to what his body was telling him. And when he needed extra time to rest and recover, he’d take a day off; Arnold is one of the most practical, result-oriented individuals on the planet.