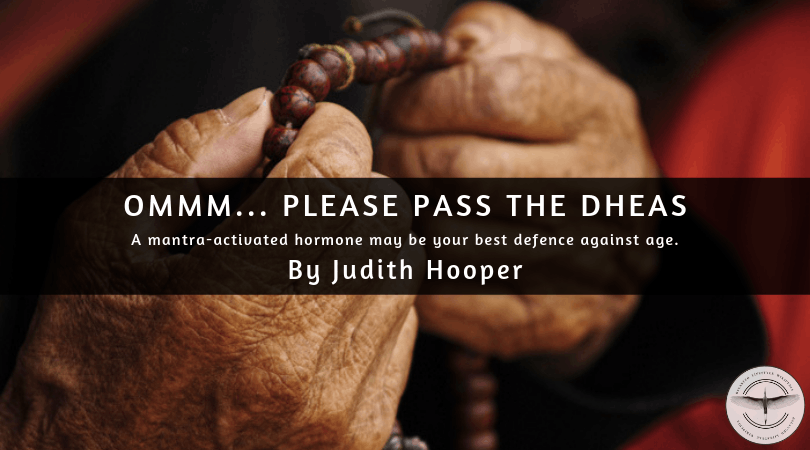 In the Himalayas it is not uncommon to hear tell of yogis who are several hundred years old. “Of course, these stories have to be taken with a grain of salt,” admits psychologist Charles Alexander of the maharishi International University (MIU) in Fairfield, Iowa, “but meditation does seem to extend life.”

In fact, having a mantra may slow aging, according to an intriguing study of another MIU researcher, Dr Jay Glaser. Glaser found that older people who had practiced transcendental meditation (TM) for at least one year have higher levels of the hormone DHEAS (dehydroepiandrosterone-sulfate) in their blood. Since DHEAS, which is secreted by the adrenal glands, declines with age and declining levels of the hormone have been linked to heart disease, osteoporosis and other maladies of age, high levels of the hormone may be a good index of general health and well-being. “We ruled out the effects of diet, smoking, exercise, weight and lifestyle,” notes Glaser, “so the only difference between the two groups was meditation.”

The belief that DHEAS can boost longevity has not yet been proven, although some researchers report that, in the lab, the chemical successfully bolsters the failing immune system in mice suffering from lupus. Others hypothesize that raising DHEAS levels via supplements may prevent heart disease.

The idea that meditation can increase life expectancy has not been backed up with hard scientific data, yet the effects of achieving an altered state of consciousness on the body is fertile ground for research.

In a study, MIU physiologist Keith Wallace tested long-term meditators on the Morgan Scale, which is a gauge of biological age based on measures of blood pressure, vision and auditory threshold. To his surprise, he found that these tranquil souls scored 12 or more years younger than their chronological age.

And that’s not all. Meditation may actually increase survivability in old age, according to a study conducted by Alexander and Harvard University psychologist Ellen Langer at eight Boston-area nursing homes. Although the average age of the patients was 81, a hundred percent of those who practiced TM for 20 minutes twice a day were still alive three years later. That was a good deal better than the overall nursing home death rate of 38 percent during that period. And the benefits seem to go beyond simple stress-reduction. The meditators also outlived patients in the study who had been taught relaxation and mental alertness techniques.

Although there are many forms of meditation, Alexander credits the “distinctive state of restful alertness” produced by TM for long life. “There has been a lot of research on the importance of autonomy on health and longevity,” he adds, “but how do you empower someone from the outside? This is self-empowerment. It’s especially valuable to people who are in a situation where they have little control, such as those who live in institutions.”

Well, you wouldn’t expect MIU researchers to discover that TM is bad for your health. And it would be nice to read about research on some other form of meditation someday – Zen, say, or Sufi dancing. But it does seem that actuarial tables would do well to factor in karma and peace of mind.

A mantra-activated hormone may be your best defence against age!