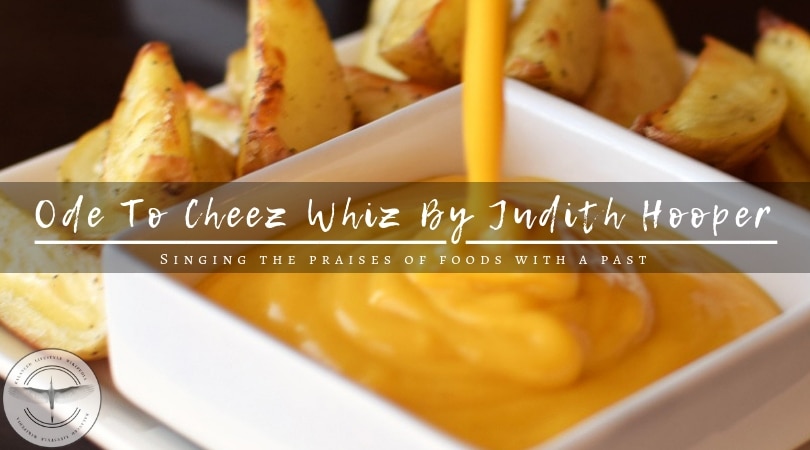 Author (Judith Hooper) Bio: She wrote articles for magazines from the Atlantic Monthly to Omni and Allure, and authored several books. Of Moths and Men (W.W. Norton, 2002) was a finalist for a Los Angeles Times Book Award and the PEN/American Prize for First Nonfiction and was reviewed favorably in the New York Times Book Review, the London Times Literary Supplement, the Wall Street Journal, the Guardian, and the usual suspects.

Singing the praises of foods with a past!

My friend’s meals usually resemble grass, sawdust or livestock feed. She would rather have a rattlesnake than a preservative or additive in her cupboard, and she considers people who eat steak, french-fries and hot-fudge sundaes only slightly less loathsome than serial killers. Her house overflows with obscure herbs and teas, and in her mason jars something is forever in some stage of sprouting. She is a Joan of Arc of the organic, a health-food zealot. I admire her purity, and yet…

I can’t help thinking of the scene in Sleeper when Woody Allen wakes up in the next century to find that scientists have discovered the only healthful food is a hot-fudge sundae. Sometimes, I admit, I hope something like this will happen and my friend will get her comeuppance – if only because then I won’t feel so guilty about my Fritos.

So I was secretly relieved to learn that the relationship between food and longevity is not as clear-cut as my friend imagines. A couple of decades ago, Bruce Ames, professor of chemistry and molecular biology at the University of California at Berkeley, started wondering about the long list of synthetic chemicals in a bag of potato chips. Did these things cause cancer? At the time, tests for carcinogenicity were long and expensive, involving hundreds of laboratory rats and years of observation.

By the early ’70s, Ames developed a faster and cheaper test: He’d toss a substance into a test tube of bacteria and see whether it caused mutations. If it did, the substance was possibly carcinogenic. His now-famous Ames Test warned of the perils of thousands of man-made chemicals in such products as food, hair dyes and the flame retardant Tris. In some cases, the suspect chemicals were banned.

A decade later, Ames had cause to reconsider his angle. When he and other scientists began testing a host of Mother Nature’s products – including bananas, apples, Brussels sprouts, radishes, raspberries, grapefruit juice, honeydew melon, celery, parsley, cocoa, carrots, red wine, rhubarb, beets, fava beans, pineapples and black pepper – they found that these things, too, looked ominously carcinogenic. Now Ames, no longer the darling of environmentalists, estimates that 99.99 percent of the pesticides in our diets come from natural sources. Because 50 percent of both natural and synthetic chemicals are carcinogenic, we can’t ignore the danger natural chemicals in our food present.

How much time can be spent worrying? Does every visit to the supermarket require a conference of experts waving sheaves of citations? After a while, everything seems to be bad for you, including what used to be good for you, like eggs and meat – and now vegetables. To add to the confusion, while exerts like Ames are noticing that everything natural isn’t necessarily benevolent, others are discovering unexpected virtues in some “junk” foods.

Consider a few “good” foods that might be bad:

My friend’s typical holier-than-thou salad is chock-full of vegetables from the organic food mart, which guarantees they are untouched by any agricultural technique developed by since Neolithic times. No pesticides, for sure. “Organic food may be more dangerous than Safeway food,” says Ames. “When plants get stressed [e.g., by attacks of critters] they make more of the natural pesticides.” These, he says, may be more toxic than any DDT residues that might creep into our diets. Furthermore, the salad contains:

Raw Mushrooms. They’re organic, of course – and “full of carcinogenic,” including natural pesticides called hydrazines, Ames says. Drinking apple juice with Alar is about one fiftieth as hazardous to health as eating one mushroom. By now her salad is looking quite carcinogenic, considering the…

Mold. That’s right, the mold on organic nuts, cheese wedges and apple slices harbors a variety of carcinogens, according to Ames’s studies. Last, but not least, behold the very symbol of small-planet, whole-earth eating…

Alfalfa sprouts. My friend tosses these liberally into every salad and sandwich, little suspecting they contain natural toxins that Ames says cause the disease lupus in monkeys. Of course, the monkey’s diets were 40 percent alfalfa sprouts, more than any human health nut could possibly eat, but let us stop worshipping sprouts.

Other staples of a virtuous regimen are also worrisome:

Cabbage and broccoli. These contain substances that, in the stomach, transform into a natural chemical related to dioxin, the deadly herbicide in Agent Orange, according to Ames. On the other hand, broccoli, like many vegetables, also contains anticarcinogens that may or may not cancel out the carcinogens.

Comfrey tea. God knows, no caffeine would ever touch my friend’s lips. She gets all her highs (as well as her tranquility) from herbal teas. Unfortunately, comfrey tea contains a carcinogenic natural pesticide, symphytine, according to Ames.

Margarine. Since the bad news broke about saturated fats and heart disease, no health fanatic would dream of slapping butter on her seven-grain toast. Now it seems polyunsaturated fats increase the oxidation rate of cells and thus create more “free radicals,” those unstable, stripped down molecules many scientists believe blur your DNA, hasten aging and cause cancer.

Yet there is no reason to post Surgeon General’s warnings on cabbage, basil or mushrooms. Consumed in normal quantities, none of these foods is likely to be harmful, says Ames. Nor should anyone panic about trace amounts of preservatives or pesticides that might make it to our mouths, he points out. If man-made chemicals were so deadly, how is it that life expectancy has risen and the cancer rate (except for lung cancer caused by smoking) has remained level? Hysteria about every new chemical, Ames believes, distracts the public from real documented risks like tobacco and saturated fats.

Now for the good news. Strange but true, some bad foods might be good (or at least not entirely evil):

Hamburgers. You don’t find many health-food nuts hanging around burger joints, but the specialties there do have merits that alfalfa sprouts, say, lack. About a decade ago, biologist Barry Commoner and others discovered that how you cook hamburger mattered. Frying, which produces carcinogens, was bad, but broiling was OK. Now, from University of Wisconsin food scientist Michael Pariza, comes news that cooked meats contain a cancer-fighting substance called CLA. A variation on the polyunsaturated fat linoleic acid, CLA reportedly guards against several forms of cancer. It achieves this healthful objective by preventing the normal buildup of free radicals from damaging healthy cells.

Cheez Whiz. Sure, dairy products create sludge in your arteries. On the other hand, Pariza reports that milk, butter and cheese are rich in cancer-fighting CLA. And the highest CLA content of all – six and a half times higher than plain cheddar cheese – is found in that snack-in-front-of-the-TV delight Cheez Whiz. (Imagine. Cheez Whiz a health food!) While Pariza doesn’t recommend a Cheez Whiz diet because of the heart-disease risk, his findings have not gone unnoticed by the dairy-products industry. “Kraft loves us,” he reports.

Carbohydrates. Health-conscious snackers eschew the empty carbohydrates in sweets like Hostess Twinkies and Snickers bars. But the sugar in a Snickers, for example, stimulates the brain to produce a vital chemical, serotonin, which “relaxes you so you can cope,” according to Judith Wurtman, a leading research scientist at the Massachusetts Institute of Technology. That may explain why people going through sturm und drang in their love life are famous for overindulging on chocolate. Serotonin is said to be nature’s remedy for the blues. However (you knew the prescription for Snickers was too good to be true), for best results try a potato, a bagel or a small bowl of rice.

Preservatives. If you want to clear out a health-food restaurant fast, just yell, “BHT!” The clientele there typically go to heroic lengths to avoid contamination by the alphabet soup of additives, preservatives and dyes in many packaged foods. However, when comedian Jay Leno joked that the expiration date on Wonder Bread id “You should live so long,” he unknowingly touched on an odd truth. What preservatives do for food is extent shelf life.

James Fleming, a research scientist at the Linus Pauling Institute of Science and Medicine in Palo Alto, California, thinks they can do something similar for human life. The best one, according to Fleming, is propyl gallate, which increased the longevity of fruit flies by about 30 percent. “Our assumption is that anything that preserves the flies is going to preserve any biological system,” he says.

Then there’s BHT, a preservative in everything from lard to cornflakes. An eminent gerontologist, University of Nebraska’s Denham Harman, found that it enhanced rodent life span by up to 20 percent and improve immune function. And the preservative BHA had an anticarcinogenic effect in animals. All are antioxidants, meaning they reduce free radicals, which spoil cells as well as food.

“The real question is how much,” says Harman. “To extend life span you need very high concentrations, much higher than anything you’d get in packaged food. In lower amounts you might see an effect on a specific disease.” Indeed, one leading cancer epidemiologist points out that stomach-cancer rates have been declining since 1974, the same year that BHA and BHT were added to breakfast cereals.

Perhaps by the upcoming years many food preservatives and additives will turn out to be longevity drugs. Perhaps, as Fleming predicts, we’ll all be swilling down “preservative cocktails” instead of carrot juice in the hope of hearing a latter-day Willard Scott wish us a happy 115th birthday.

Of course, behind every silver lining there’s cloud. BHT reportedly knocks out the functioning of the mitochondria in cells, according to Harman, and produces some kind of cancer while preventing others. Furthermore, there’s evidence that some food additives and preservatives may cause subtle neurological damage. Most things are neither wholly good nor wholly evil. Because today’s elixir of life may be tomorrow’s poison and vice versa, it’s wise not to go to extremes and live exclusively on Wonder Bread, alfalfa sprouts or anything else. I know I now appreciate the importance of a diverse diet. Well, excuse me, I’m late for dinner. A Whopper smeared liberally with Cheez Whiz, a BHT shake and fudge-ripple ice cream!