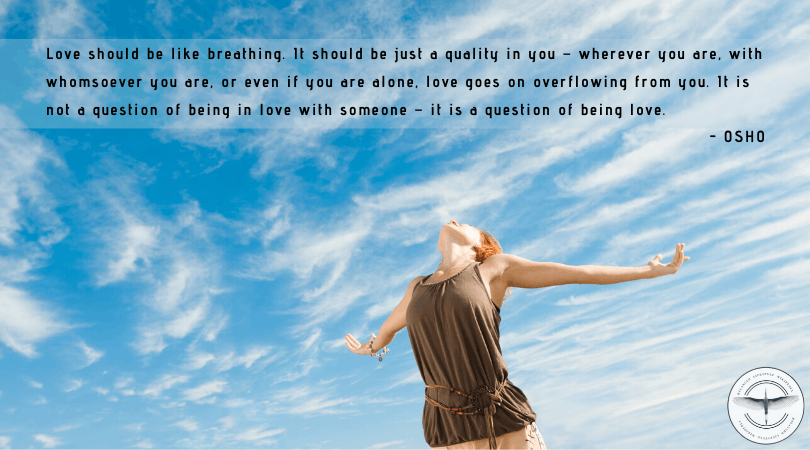 Since in recent years has discovered love. Psychiatrists have concluded that the great taproot of mental ills is lovelessness. Child psychologists, wrangling over scheduled versus demand feeding, spanking versus non-spanking, have found that none of it makes much difference so long as the child is loved. The sociologists have found love the answer to delinquency, the criminologists have found it the answer to crime.

Love might be called the soil in which the loved one grows. It enriches him without limiting or restricting him. Love is basically a “giving” operation, though we often think it as “taking”.

“The love of a person,” says Dr. Harry A. Overstreet, “does not imply the possession of that person. It means granting him, gladly, the full right to his unique humanhood. One does not truly love yet seek to enslave by bonds of dependence or possessiveness.” Dr. Erich Fromm puts it this way: “To love a person implies caring for and feeling responsible for his life, for the growth and development of all his human powers.”

In institutions which deal in human relations, love is being used more and more as medicine. At the Menninger Clinic in Topeka Kansas, I found that in the treatment of mental illness one of the standard prescriptions used by the physicians was “love’ unsolicited”. Patients whose illness was rooted in lovelessness were shown a special attitude of love whether they earned it or not. For example, Mr. C. had been an unwanted child. He had grown up into a “lone wolf” unable to make warm, human attachments with anyone. He lived in a world without love. He came to the clinic at thirty-five, diagnosed “schizophrenic”. He had simply withdrawn from the real world into a delusional one of his own. At the clinic he refused to budge out of his room and sat without making any effort to communicate.

The doctors prescribed “love’ unsolicited” for him. Doctors and nurses treated him with warmth and affection. They played checkers with him. They said, “How well you look, Mr. C.”, and “It certainly is a pleasure to visit with you”. One morning Mr. C. walked out into the garden, the love of those around him had made the real world seem not quite so horrible after all. He began to recover.

At the Hawthorne Cedar Knolls School, an institution for problem children near New York, I saw love used as medicine in another way. A new boy, Charlie, aged fifteen, arrived at the school with advance billing by the Children’s Court as “incorrigible”. He had stolen money from his parents, his language was foul, his behavior like a wildcat’s. “Coach” Robert Exton, then housefather at the cottage where Charlie was assigned, did not agree that this boy – or any boy – was “incorrigible”. He took Charlie for a stroll. The boy began swearing. “Some people may like dirty language, Charlie,” said the coach quietly, “but I don’t seem to go for it, somehow. Would you do me a favour —?”

Charlie, surprised at the friendliness of Exton’s tone, flushed a little and went silent. Then Charlie tried another track. “I brought some riding boots down here and I’m going to wear them to dinner, see?”

“Sure,” said the coach. “That’s okay with me.” “Okay with you yeah!” Charlie rasped. “Except that you’re going to lock my boots up!”

“Oh, no, we don’t think it necessary to lock anything up at our cottage.”

“Nothing? Boy, are you dopey!” “Perhaps,” the coach said. “By the way, here are my car keys. I wonder if you’d hold on to them for me. I’ve a hole in my pocket.” When they turned back to the cottage, Exton said, “Come in any time you want to, Charlie.” Six months later I checked back on the “incorrigible” boy. He had received a good deal of love by then. On his chest was a medal he had won – for good citizenship.

Even in the treatment of sexual promiscuity, I found love used as a medicine. Doctors at the San Francisco Public Health Clinic discovered that promiscuous girls often had been emotionally crippled by lack of love. They were incapable of a mature love relationship, and neither gave nor received love in their sex behavior. But they had, nevertheless, “an excessive need for love based upon unfulfilled needs of their childhood.” In restoring them to emotional health, the clinic gave them the love they had been in need of all their lives – the affirmation of themselves as people, the self-respect, and the strength to grow.

“People believe that nothing is easier than to love,” says Dr. Fromm. “But on the contrary, while every human being has a capacity for love, its realization is one of the most difficult achievements.”

A man may think he loves his wife because she is beautiful, talented, and competent. This is not love. It is approval. Love depends not upon the attributes of the love object, but upon the individual’s ability to love. This ability must be cultivated. It does not always “come naturally” as so many of us believe. Dr. William C. Menninger said, “I think that the best thing parents can do for their children is to teach them how to love.”

The only way to teach love is by example. By cultivating our own capacity to love, we teach those around us to love. Children must receive love in order, later, to give it. We do not love our children simply because we protect and provide them. The animal does that for its young. The test is: To what extent do we affirm our children as people? How much do we respect their individuality? How much do we help them grow independently I instead of smothering and possessing them?

Overindulgence of children is a dangerous form of pseudo-love. At the Children’s Village, Dobbs Ferry, New York, three hundred young boys are being retrained for good citizenship. Many of these youngsters have known only indulgent pseudo-love – a guilt-ridden attitude which “buys off” a child rather than strengthening his growth and responsibility. “Every day,” stated Harold F. Strong, former director, “we are undoing the damage done by parents who have confused the word ‘love’ with ‘appeasement’.”

The discovery of love has also shown that self-love is good – that we must love ourselves if we expect to be able to love others. The late Joshua Loth Liebman pointed out that the Biblical injunction “Thou shalt love thy neighbor as thyself” presupposed that we would love ourselves. To the degree that we hate ourselves or others we are emotionally ill; our ability to love has become thwarted.

“Case after case shows a lack of self-love at the root of mental illness.” reports an expert of the Payne Whitney Psychiatric Clinic in New York. “If people had a healthy love of themselves instead of carrying hidden burdens of self-contempt, our psychiatric case load would be cut in half.”

Dr. Robert H. Felix, when he was director of the National Institute of Mental Health in Washington, D.C., defined self-love as, “One has a feeling of dignity, of belonging, of worthwhileness, a feeling of adequacy – yet a healthy sense of humility.”

A mature, healthy personality, with a strong ability to love, does not “love” just his wife or a few special friends. He loves – period. Says Dr. Overstreet, “If what we call love in relation to one person or to a few people creates in us no added capacity for goodwill towards many, then we may doubt that we have actually experienced love.”

Dr. G. Brock Chisholm, the famous director-general of the World Health Organization of the United Nations, had recognized that our global future depends upon the number of mature individuals we can produce, people capable of love, capable of approaching the problems of our changing world as ‘love people’, not ‘hate people’.