Is Your Job Giving You A Pain In The Neck? 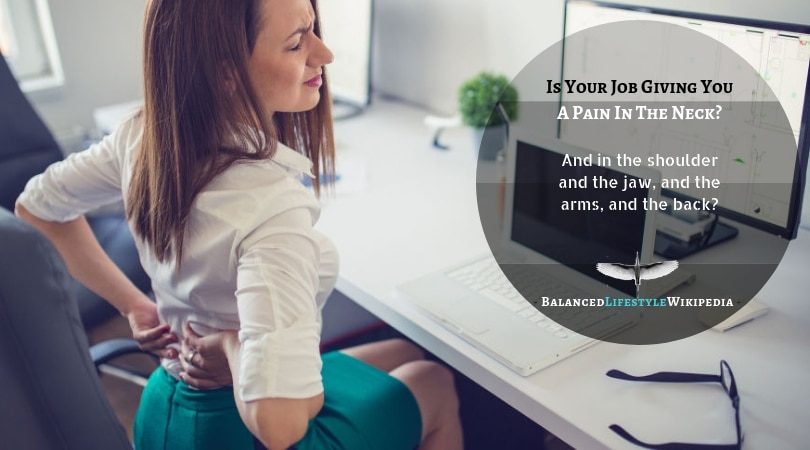 …And in the shoulder… and the jaw… and the arms… and the back?

Muscle in with some help!

Griping about inhuman bosses, unforgiving project deadlines, or promotions deserved but denied, may help you get through a high-stress job. But it does nothing for the aches you get all over – in your jaw, neck and shoulders (which often lead to headaches) and in your lower back and legs.

Physicians today are seeing the same gallery of minor aches and pains all the time among their white-collar clientele. Often the underlying problem is a lack of exercise or bottled-up aggression. Executives who don’t get enough physical activity can’t diffuse the energy that builds up from day-to-day frustrations. The repressed urge to punch or kick somebody results directly in muscular stresses, particularly among lower-level executives who have a lot of responsibility but no control over their jobs. They become walking – rather, sitting – textbooks on what doctors in America (where else but America) are today calling execu-pains.

To get an idea of where neck pain actually comes from, clench your fist and visualize what’s going on inside. Muscles are hard, contracted, pressing against the skin. These muscles also push against nerves, and over time those nerves can become irritated. Different people express their tension in different parts of the body. Some get ulcers, some develop high blood pressure, some will get a heart attack in 20 years – and some get neck pains and tension headaches. In certain people there seems to be a kind of constitutional pre-disposition – a weakness – to muscular pain.

Often, the weakness stems from an injury (which itself could be stress-related tense muscles are less supple). One executive’s problems began when a nerve became pinched by a swollen disk while he was running. It healed, but slowly. He stopped exercising, which set off a spiraling degeneration: Lack of activity made him more susceptible to stress, which made his back feel worse, which kept him awake nights, which left him exhausted – making his back feel worse. Then the aches and pains began to spread. In severe cases, this kind of progression can lead to a chronic condition called fibromyalgia that lasts for months or years and virtually incapacitates people.

But it needn’t be so. These pains are very inter-related, and can be managed without expensive or time-consuming treatments. The best remedy is to relieve the stress itself, either by avoiding anxiety-provoking situations or by tapping a variety of relaxation techniques. But there are also physical ways to soothe pains where they live – in the muscles.

Prescription number one is exercise. In some cases, working the muscle that’s in pain ultimately can be the best thing for it, despite the usual wisdom of not doing something that hurts. (But don’t push pained muscles too far. It’s important that exercises be moderate and properly performed.) Stretching to relieve stiffness can help keep pains from ever hitting, but if you hurt in a particular area, you should perform a therapeutic stretch at least three times a day. Here’s a guide to the six most common execu-pains and the simplest, most effective tips for easing them.

They almost always go together. Common causes are cradling a phone with your shoulder or craning your neck to view a computer screen. That pain in the neck often radiates upward, creating a band tightness from the base of the skull or around the forehead.

This problem is typically characterized by pain on one side of the face shooting into the head. People under pressure have a tendency to clench and grind their teeth, which can lead to a jaw malady called temporomandibular joint (TMJ) disorder. But a lot of so-called TMJ problems are really due to muscular tension on one side of the jaw. That creates an imbalance, and the muscle acts as if there’s a problem in the joint itself.

Most shoulder soreness comes from irregular use of or physical abuse to muscles and tendons, but with stress, neck pains can irritate the nerves that lead to the arms, allowing pain to radiate to the shoulders.

The back is particularly vulnerable, because muscles here do most of the work of supporting the body when you’re sitting. If you don’t have a good chair, you’re in for big trouble. But even if your company springs for the latest ergonomic wonder, you should change position a lot, stand when you’re on the phone and stretch frequently. When pain hits, if it’s mild, try these stretches. (For severe back pain, consult your doctor).

Pain often starts in the lower back and shoots downward. Leg pains are often called sciatica, a condition that may signal serious problems from a herniated disk. However, more than 90 per cent of sciatica-like pain (usually in the buttocks and upper leg) caused by prolonged sitting. (Don’t get alarmed unless the pain extends below the knee or persists for several days.)

To stretch buttocks muscles, sit erect in a chair and cross your left leg, ankle-on-knee. Cup your left knee with your right hand. Simultaneously pull your knee and ankle toward your right shoulder until you feel muscles stretch slightly. Hold for 30 seconds and release. Repeat with your right leg.