How Medicines Can Affect Your Looks? 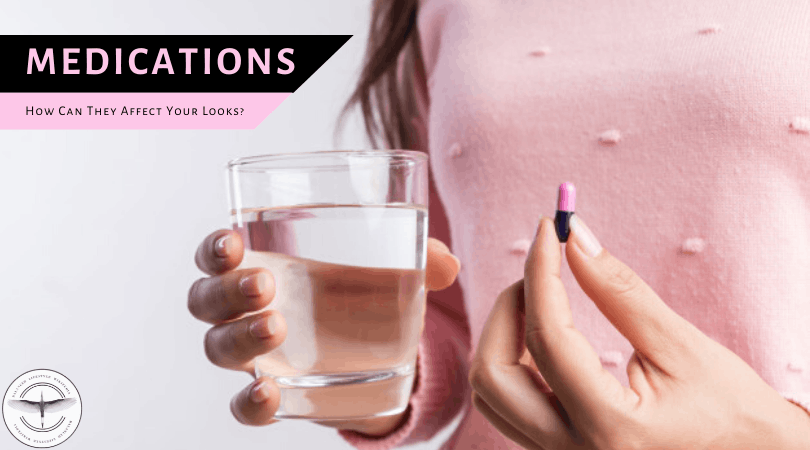 If you are on regular medication and have a new problem in the looks department, there may be – just may be – a link between the two!

Health and beauty go hand in hand, they say, and there’s no denying that a person in ‘the pink of health’ has a glow all his own. Yet, strangely enough, some medicines which improve your health can damage your looks. That’s right – they make you feel better but look worse!

Says consulting dermatologist Leslie Marquis, “Medicines, especially those used over a long period of time, can have side-effects on skin, hair, teeth, nails and body shape, affecting your total appearance. In some cases, the looks are so clearly affected that it is obvious to a doctor that the person is on some long-term medication. Not all medicines have such side-effects, of course.” Let’s take a look at some that do:

A prime spot for side-effects to show up, sometimes in the form of new pimples and blackheads. These are actually quite harmless but distressing to the beauty-conscious!

Steroids, increasingly prescribed for various ailments like asthma, allergies, arthritis and skin problems, can bring on pimples. So like testosterone, prescribed to men or taken by athletes to build muscles. Birth control pills and other hormones used to treat female disorders often start or aggravate spots on the face.

Vitamin B12, which is enthusiastically taken to improve the skin, can produce pimples on some people. So can the extended use of cough expectorants containing iodides. Oil-based ointments, when applied on the face, can also give you a spot or two.

Drugs can mark the skin in other ways too. Birth control pills may leave you with faint, dark patches on the cheeks or make the whole skin extra-sensitive to light, so that you tan easily and look darker. ACTH, a drug which may be prescribed to chronic sufferers of asthma, arthritis or allergies, can produce dark patches. Beware of over-the-counter ointments which are “guaranteed” to clear up stubborn skin problems like ringworm or fungal infections. “I’ve seen some unfortunate cases of skin almost being burnt out with such lotions and ointments, leaving dark patches that take years to fade,” says Marquis. “There is a wrong notion that herbal medicines and home remedies have no-side-effects. Natural substances are also chemicals, after all.”

Then there are medicines which cause dryness of the skin, leaving it rough and scaly. These include cholesterol-lowering agents and also some drugs used in psychiatric disorders. An excess of vitamin A can make the skin scaly. Severe dryness is also a side-effect of anti-leprosy drugs (though, obviously, nobody would mind a bit of dry skin if they could get rid of the leprosy!)

Men may not crave a lovely complexion, but hair is one aspect of looks that is precious to almost everybody – regardless of sex or age. Medicines can have unwanted side-effects on the hair as well. Anti-thyroid drugs and anti-coagulants (used to treat blood disorders) can set off hair loss. Some women on the pill suffer falling hair while others report hair loss three or four weeks after giving up the pill. Usually, hair lost due to medication grows back over time. Some anti-malarials can turn the hair grey and that, unfortunately, is irreversible.

Yet other drugs will make you sprout hair where you don’t want it. Steroids can cause users to sprout new hair on the upper lip and face. Men may welcome a thicker beard, but it can be pretty traumatic for the ladies!

Anti-malarials can discolour nails, making them bluish-black. Long-term use of tetracycline (prescribed for various kinds of ailments including respiratory infections and severe acne) can coulour nails yellow. Ridged nails is one minor side-effect of anti-cancer drugs. Prolonged use of certain anti-biotics may cause the nail to separate from its bed, but this is rare.

Till recently, teeth were considered essential equipment for chewing and that was all. Now that good teeth have become a vital component of good looks, you will want to know which drugs can dim their sparkle. Tetracycline, which would be given for something as common as diarrhoea or kidney problems, can permanently stain the teeth of children, turning them brown or yellow. Says dentist, “Usually, doctors will not prescribe this drug to children below thirteen. But if the mother-to-be takes it during pregnancy, the child’s first set of teeth may be yellow.” Some anti-tuberculosis drugs can gradually give an orange shade to the teeth. Children who are given various fluorides for strengthening the enamel may end up with mottled teeth. Says dentist, “Particular drugs given to epileptics can enlarge the gums so much that they (the gums) show more than the teeth!” If your medication includes the drug bismuth, a blackish-purple line may develop around the margin of the gums. But no cause for alarm – once the medication stops, the teeth and gums usually return to normal.

Your medicines can provide relief and a few extra pounds as well. Steroid drugs are the big culprit in this respect. Users develop a jumbo appetite and the effect of all that extra eating soon shows.

Steroids can make you look heavier in yet another way. Like oral contraceptives, they cause the body to retain fluid, which ups your weight and gives you a typical bloated look. The puffiness is most evident on hands, face, breasts and ankles. Says Marquis, “A moon-faced patient with ‘buffalo pads’ of fat on the shoulders is easy to recognize as a steroid-taker.”

Diabetics, who are usually asked to keep their weight in check, may feel hungrier due to their regular dose of insulin, leading to overweight. Tranquilizers and sleeping pills are designed to slow you down, which means you are working off less calories. So, unless you eat less, tranquilizers could leave you heavier than before.

Middle-aged women who suffer symptoms of menopause find relief with hormone therapy. This however could make them look puffy with retained fluid. Tonics that promise to make children grow are usually appetite stimulants. They could make a child eat more and put on weight, with no guarantee that he will also grow taller.

Sometimes even a single dose of medicine could make you break out into a rash, develop red patches all over or go puffy in the face. That, of course, is your individual allergic reaction, not a regular side-effect. This can happen if you cannot tolerate the drug or the dyes and preservatives present in it.

WHAT CAN BE DONE?

If you suspect that the medicine you’ve been taking is affecting your looks in one way or another, what can you do? Go ahead and ask the doctor if there is a link. If there is, maybe the damage can be minimized. For example, if you are on drugs that increase your appetite, you could combat the extra hunger with low-calorie foods. The bloating due to fluid retention may be controlled by limited salt intake. With other problems, ask if the drug could be changed, or the strength lowered. Check if you can safely take a short break from the medicine. Needless to say, don’t change anything till you ask the doctor – you may end up losing more than just your looks!

If your ailment is serious one and simply nothing can be changed about the treatment that is marring your looks (as in the case of chemotherapy, for instance), you may have to resign yourself to being less beautiful. For the sake of good health, it is a small price to pay.