Hope – The Only Antidote To Fear, Indifference And Despair 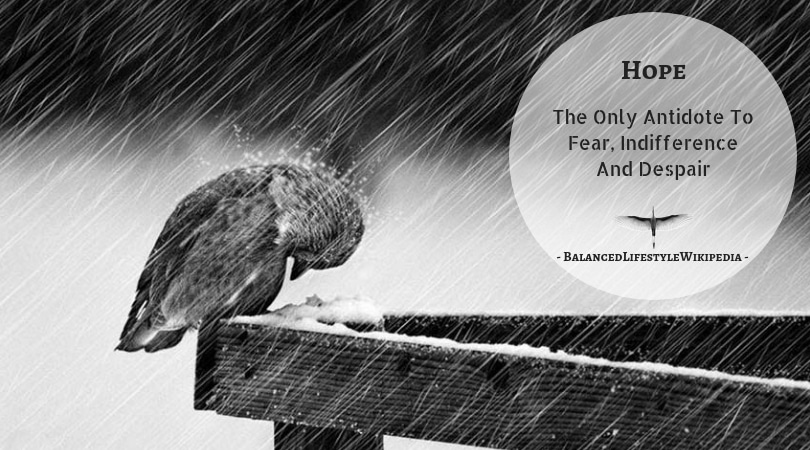 Science says you can hope for the best – and get it!

Pandora, Greek myth’s Eve, was given a mysterious box by the Gods, who told her never to open it. One day, tempted, she lifted the lid – and loosed into the world all the evils now known. But she closed the box just in time to save an antidote: HOPE. The ancient myth of Pandora heralds today’s scientific fact.

Some Of The Most Provocative Research Shows That The Hopeful Life Is Demonstrably A Healthier One, Too!

Rigorous new studies identify hope as a powerful positive force in human endeavor – a secret ingredient that can help nurture your health, well-being and success.

The findings are especially significant for women, who on average are twice as likely as men to become severely depressed during their lifetime.

Hope, then, is something more than a poetic abstraction, an ephemeral feeling or an article of faith. Indeed, an area in psychology is developing around hope and its astonishing impact.

THE ANATOMY OF HOPE

Researchers make subtle technical distinctions between hope and optimism. Hope to them means having the energy and ability to turn dreams into reality. Optimism is the resiliency to bounce back after a disappointment. The benefits of hope and of optimism, however, turn out to be roughly equivalent.

For all practical purposes the two concepts are different names for the same outlook.

The leader in the new thinking, and a scholar of hope for more than 25 years, is Martin Seligman, Ph.D., a psychologist at the University of Pennsylvania and the author of Learned Optimism: How to Change Your Mind and Your Life.

Dr. Seligman has devised a test to determine your level of optimism. To illustrate how individuals practise hope, or don’t practise it, Seligman tells the story of Kevin and Nora, accountants who took his optimism test.

[Read: The Optimist Test – Is Your Glass Half Empty Or Half Full?]

Recently, along with half their department, Kevin and Nora were laid off. Both were depressed, and they avoided looking for a new job. Otherwise their reactions were completely opposite.

Kevin went into a deep funk. He ignored his wife and their baby, and spurned friends. He gave up jogging. And he caught a cold that lasted for an entire winter.

Nora was a loving as ever, kept in touch with friends, still worked out at her health club three times a week and stayed healthy.

Their reactions matched Seligman’s profile of them. By nature, Kevin was a pessimist. So, when he was fired, he closed down off the job, too. In Seligman’s terms, Kevin’s sense of hopelessness spilled over and poisoned everything else – including his health.

Nora, an optimist, confined her troubles and went on about her life, even as she anguished over the firing.

Then both Nora and Kevin were asked to return to their firm on a temporary basis. Nora’s response: “They finally realized they can’t get along without me!” Kevin’s: “They must really be shorthanded.”

The optimist sees misfortune as limited in time, specific to the given situation and ultimately changeable. Meanwhile, the pessimist broods on the futility of it all.

By understanding the mechanics of hope, Seligman believes, we all can learn to shore up our ability to cope with misfortune, and avoid a debilitating depression.

The power of hope can be measured, as Seligman learned in a study for the Metropolitan Life Insurance Company. He was hired as a consultant to help stanch the drop-out rate among new agents. On sales calls, the agents are turned down repeatedly. Should only optimists apply?

Seligman tested 1,129 new agents, including 129 super-optimists who had just missed meeting the usual screening standards but were hired for the purpose of this study.

By the second year after hiring, optimists generally had outsold pessimists by 31 per cent. The super-optimists set the pace with a spectacular 57 per cent margin.

The message: In sales, as in most endeavors, the combination of reasonable talent and the ability to keep going in the face of defeat leads to success.

Hope’s applications are more than just social and professional. The hopeful life is demonstrably a healthier one, too. Some of the field’s most provocative research deals with hope as a factor in physical as well as mental health.

Christopher Peterson, Ph.D., a psychologist at the University of Michigan, administered Seligman’s optimism test to 172 male and female students during the mid-1980s, then tracked their health records over the following year. The pessimists suffered twice as many colds, sore throats and flus than the optimists did – and made twice as many visits to the doctor.

A primary resource for Seligman’s health research is the famous longitudinal survey of Harvard graduates from the classes 1939 to 1944, spearheaded by George Vaillant, M.D., a psychiatrist at Dartmouth Medical School. The graduates’ health and attitudes had been closely monitored. Analyzing periodic reports the men had given to the survey, Seligman classified them as optimists or pessimists.

A striking contrast showed up in the graduates’ middle age. Optimists tended to maintain their youthful vigour longer, while pessimists were sooner to come down with heart disease, high blood pressure and cancer.

Outlook also seems to have played a role in a study of 100 heart attack victims at a San Francisco hospital. The optimists among them, as determined by Seligman’s methods, have been far less likely to suffer a second attack. They also tend to outlive their counterparts. Of the 16 most optimistic, 11 were still alive eight years after the first attack; of the 16 most pessimistic, only one.

Can a state of mind affect the body? Yes. Seligman hypothesizes: Depression hampers the functioning of the immune system, leaving you more vulnerable to disease.

Good health, then, could be encouraged by staving off depression. Seligman and the late Jonas Salk, M.D., creator of the polio vaccine, had discussed the possibilities of what they call “psychological immunization” – an educational programme that would harness the power of hope as a kind of preventive medicine.

THE WILL AND THE WAY

Understandably, a push is on to explore the dynamic of hope. At the University of Kansas, C.R. Snyder, Ph.D., a psychologist has devised his own scale for measuring hopefulness. Says Dr. Snyder, “Hope is a powerful predictor of outcome in every study we’ve done.”

In research on 245 college students, Snyder found that the level of hope among freshmen at the beginning of their first semester predicted their year-end grades more accurately than their high school grade-point averages or their first college exam did.

Given the same mental abilities and academic accomplishments, students who are more hopeful outperform those who are less so. Explains Snyder: “Hopeful students set higher goals for themselves and know how to work to attain them.”

HOPE FOR THE HOPELESS

To foster hope, Snyder and his colleagues have developed a hope-building videotape for children suffering from crippling diseases or injuries. “These kids,” he says, “aren’t hopeless – they’re marvelously uplifting.”

He tells of one nine-year-old boy, a victim of a serious accident who had to endure rigorous rehabilitation despite near-constant pain.

“How do you bear this?” Snyder asked. The boy replied, “I just have one job: to get through each day. That’s not so hard.”

“That’s why I don’t like the term ‘hopeless,’” says Snyder. “If you have even a little hope, you have pockets of strength you can build on.”