Wish It Could Last Forever; But When It Doesn’t – Getting Over Heartbreaks! 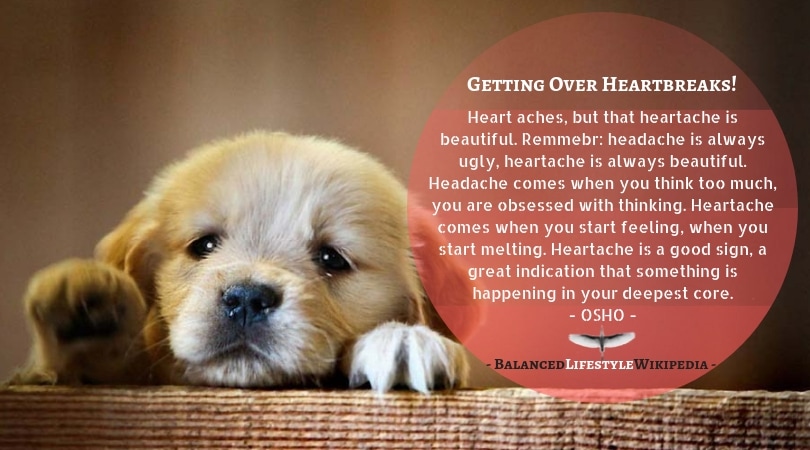 Being broken-hearted a few times is good for growing up; in fact it is highly recommended. I try to explore relationships and come up with startling revelations.

Have you ever thrown yourself on the bed and cried your heart out after a broken affair, swearing you will never fall in love again? In that case, you must have also felt the instant respite and the lightening of your spirit after all emotions, good and bad, have surged out with vehemence. And the next morning, with the sunlight bathing the walls of your room a vivacious golden, you must have changed your mind.

I have seen many people do it – and emerge wiser and more composed. Setbacks are important in life, just as they are indispensable. You don’t learn without risking a fall. Just as you never know how intense the fire is without burning your fingers. Of course, you have to see to it that the burn is not irreparable. The human has an infinite ability of suffering and then bouncing back to normal. The creative spirit or the life force in him does not let him go down for good. A broken heart could well work as an antidote and cure you of rashness, impulsive behaviour and too much of sentimentality.

First of all, why does a heart supposedly break at all? If a relationship ends, there must have been more incongruities between the two of you than you could afford to have. No two individuals are alike but two people often come together for the exclusiveness they find in each other, which is different from what they have in themselves. But it is perfectly discernible that if you are poles apart in taste, inclination and principles, there’s no question of coming together.

Why does it happen that many times we tend to be drawn towards one person more than the rest? It happens because the level at which our subconscious functions, is somewhere on the same platform as his. And to search for a companion whose sensibility and sensitivity are on the same platform as yours, takes time. Elimination is inevitable. In our haste, we often take relationships at their face value. A call centre executive says: “One is generally more cautious after a broken relationship, living by the maxim ‘once bitten, twice shy’, but as far as I am concerned, it gives me an opportunity to go out with different guys. It’s fun to judge them and see if they have all that I want.” And what all does ‘wanting’ include?

There’s lot more to a love affair than sipping coffee together or eating popcorns in a darkened cinema hall, basking in the warmth of new-found love, indifferent to the latest release. If you are merely dating, there’s no question of broken hearts when you part ways. You are broken-hearted only when you are serious about a relationship. At times people break up for reasons that seem to be most outrageous and incredible. It could be a mere habit in one that could act as the trigger factor for the other and irk him. A habit could also go to perturbing, the partner to such an extent that it results in depression and gradual loss of faith.

Kenneth had been officially engaged to this guy for a year or so. “Everything about him seemed so wonderful,” she reminisces. “Both families had agreed, so there was no social hassle. He was well placed and had no problems with me pursuing my career. He respected me; he admired the qualities I had.” Then where was the problem? Kenneth explains: “There was a part of him that didn’t seem to understand a part of me. I don’t mean that he was not sympathetic to my problems or that he didn’t give enough time to me. It was like… I have always liked watching old, English classics and he was never around when I wanted to spend a cosy evening with him watching one.”

“He’d cook up something or the other, which I do believe was perfectly harmless but which used to leave me perturbed and forlorn, for I could see through his fake excuses. He wasn’t trying to avoid me. It was just those classics he didn’t like. And I felt he failed to altogether understand a part of me. That part of me, whenever it was front stage, definitely felt alien and awkward in his presence.”

It’s all very nice to throw caution to the winds and go for wild rides, party around and imagine that the two of you are making a love story like never before and no one else. So when do the ripples begin? Obviously when one gets bored of fooling around and decides it’s time one stops soaring in the realm of stars and treads bare earth with conviction. Then surface the little patches of grey in your perfect, sunlit relationship – patches of grey that cloud your face and then your life.

Nothing is purely black or completely white. Life is full of shades of grey but each one has the right to decide the shade and extent of grey he is comfortable putting up with. And no one will like to have more than his unavoidable share. Then everything unfolds itself as a surprise. Very often, for a considerable period of time, much in a relationship is pretence. You see to it that your appearance is flawless, your manners impeccable, your temperament, ideal, and your words, infallible in their mark. But what when all the gloss wear off, as it will, some day or the other? How well do you know the person below the sheen? How snug and easy can you be with him or her as your companion? Can you bare your soul to each other?

Aneila, a college student, says: “I don’t believe in searching for the right guy; if it has to happen, it will happen.” It’s not always effortless to find your Mr. Right or Ms. Perfect. And when the fact surfaces as an unwelcome truth – heartbreaks! But it’s always better to endure heartbreaks than to be wrongly fettered to the companion who is not like you or doesn’t understand what you are like and all that you like.

“But at times you have to follow your heart, otherwise you don’t live,” argues Lisa. And the heart doesn’t go by rules. A lot of times we are searching for words and excuses, looking for someone just because we see other people with someone and we go by the trend. It’s two years Lisa’s been in love with Davis; madly in love. She argues everything about him is perfect and claims they are the ‘made for each other’ kinds. And yet, Davis has been seeing some other girl regularly for the past one year. Lisa believes it’ll pass and eventually they’ll ‘live happily ever after’.

What could such a relationship mean? Either she is cocooned in a world of illusion or else, like many others, she is just trying to overlook the truth. But why? Most girls are adjusting or indifferent as they have unconsciously imbibed it in the process of growing up. They do not analyse the person they or their parents have chosen. For them, the normal tendency is to ‘sort it out later’ but ‘later’ never comes. They go into it thinking, ‘I’ll change him’, which is never possible. This is where they lack maturity and foresight. After some years, they simply stop living and exist only through their children, which is probably worse than having a broken heart.

But it’s easier getting over heartbreaks than simply losing the cause to live and just withering away. Setbacks do make you more mature because you learn from them. They leave an indelible impression on you by etching themselves deep in your personality, leaving you a shade richer in experience. So that the next time you tread, you know what ground it is! Firm, wet, soft, or sludgy and decide how will you like it.