Be Thankful For The Defeat Which We Call Failure! 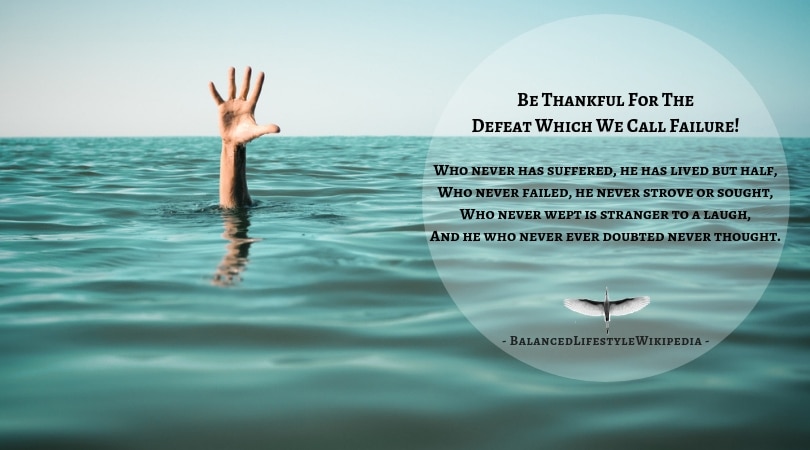 We should not forget that FAILURES are part of our educational and professional life and that they are nothing but pillars of success. Bitter and crushing failures have often contained the positive and helping germs of new and unimagined success.

Among the successful people today, more numerous are those who, despite failures, won and made their mark in life. There are others who begin poorly at early stages, ripen somewhat late and achieve brilliant results at the right time. The lesson to learn from our failures is – to go on and do better. Remember, the struggle never goes in vain. 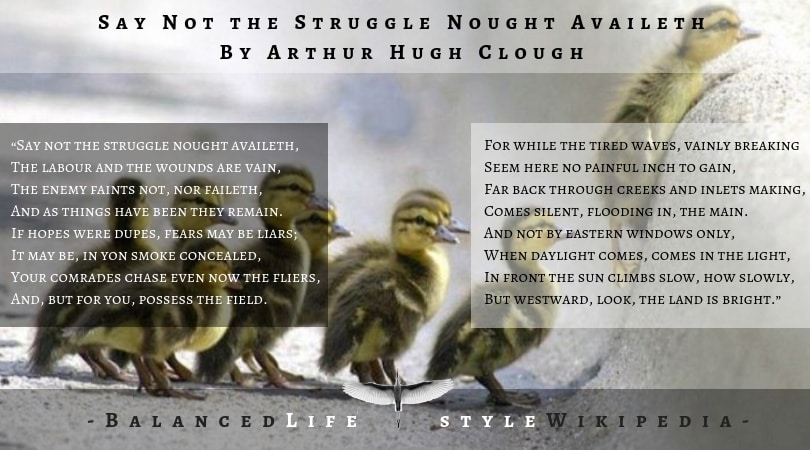 Undoubtedly, failure does affect life but one should not feel dejected. One should not allow the failure to disturb oneself. Let not the failure overpower you. As one door shuts, another opens. Failure is not defeat; it is just a part of learning process. Adversity is always intermittent and therefore if effort is constant, one is bound to win. Bad times are good times to prepare for better times. It is adversity that polishes us, it strengthens us. And it takes the test of our might.

The Test Of A Man – Napoleon Hill 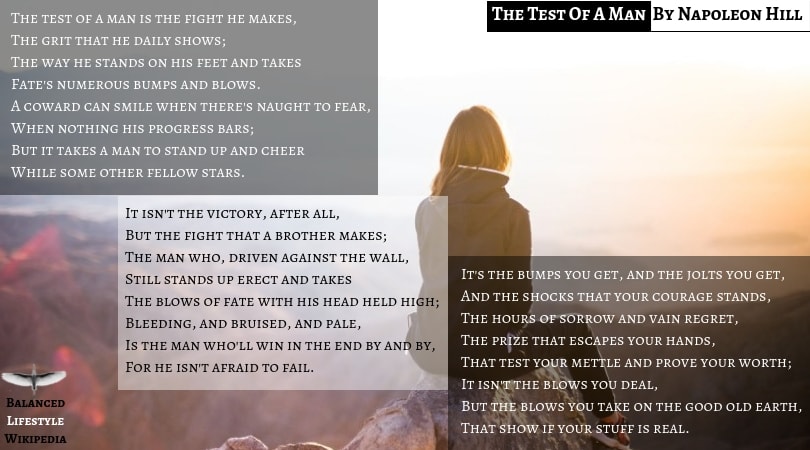 The negative attitude towards failure poisons life and the victims begin to indulge in self-pity. Genuine strength of character is promoted by adversity. The wise become industrious and learn skills through failures and get on top. In fact, it is not what befalls us that matters but how we react to it. It is the attitude – how we think and feel – the approach – that counts. The wise stuck to their guns despite repeated blows.

All Honor To Him Who Shall Win The Prize – Joaquin Miller 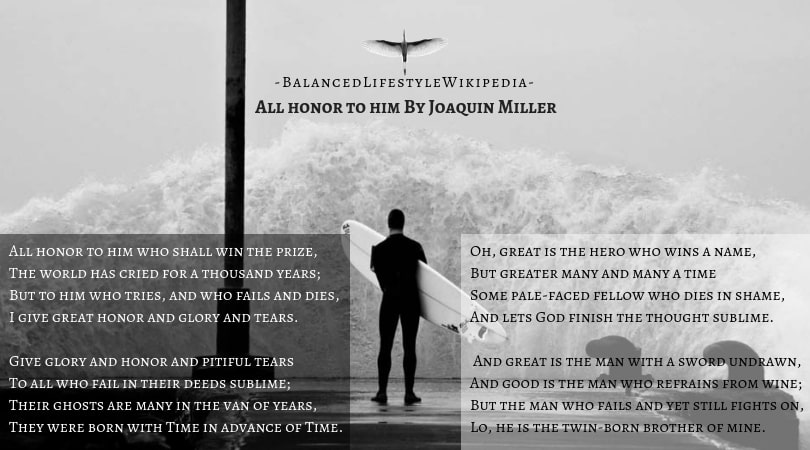 There can be no failure for the man who still fights on. The Only Way Out is to face misfortune and depend upon no power except our own inner one, turn frustration into a mighty force which will convert life from one of despair to one of delight. The courageous heart is like the palm tree which strives upwards when it is most burdened. The more acute your frustration, the greater the energy needed to meet it and greater the chances of turning defeat into victory. The bigger the obstacles, the greater the success.

When NATURE Wants To Drill A Man – Angela Morgan 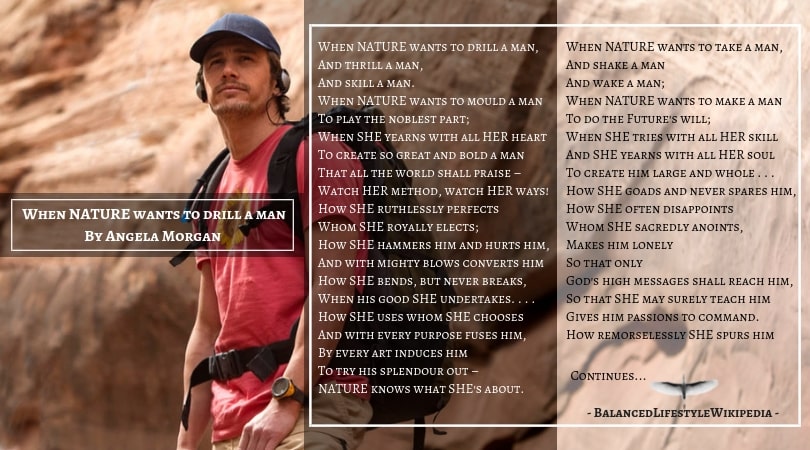 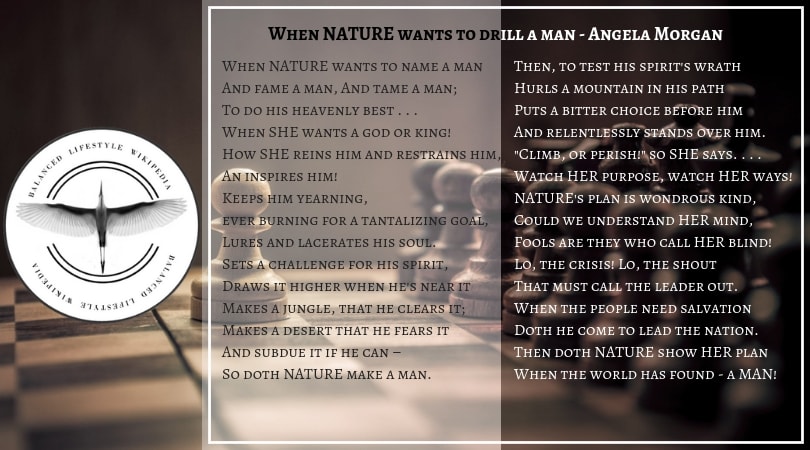 Failure is not something negative but a positive process. It is NATURE’s plan through which SHE hurdle-jumps men of destiny and prepares them for the great work. Failure is NATURE’s great crucible in which SHE burns the dross from the human heart and so purifies the metal of the man that it can stand the test of hard usage. On such failures rest the hopes of the world. 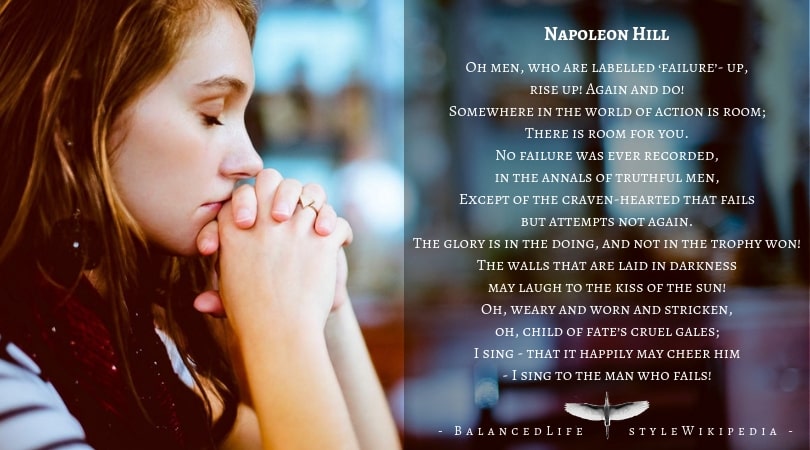 Be thankful for the defeat which men call failure, because if you can survive it and keep on trying, it gives you a chance to prove your ability to rise to the heights of achievement in your chosen field of endeavour. No one has the right to brand you as a failure except yourself. For inspiration look to the lives of those who, despite odds and handicaps, have gone on to achieve remarkable success in their sphere of activity. On the cushion of favourable circumstances, one goes to sleep. When pushed, tormented, one has a chance to learn and acquire real skill. Wise and courageous ones do not wait for the favourable circumstances, they do not sink, they do not brood, and they act. They tap their latent sources of energy. In fact, the greatest affliction of life is never to be afflicted. It is threshing which separates the wheat from the chaff.

Pen It On Your Heart: He, Who Wrestles With Us, Strengthens Us!