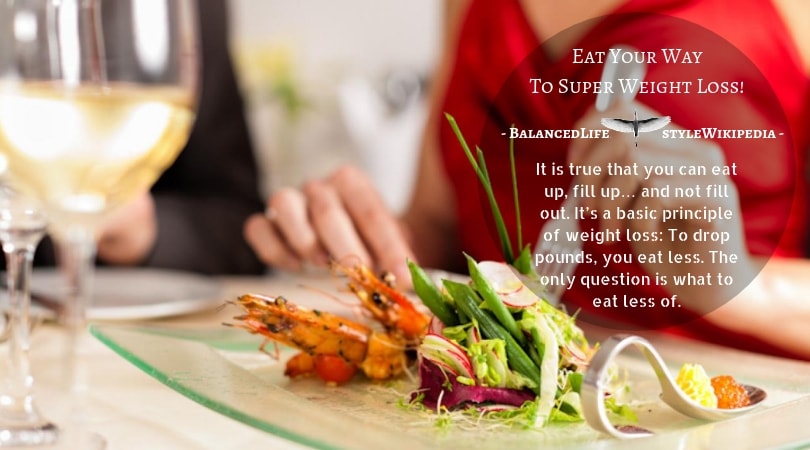 It’s not true that you’ve got to live on lime water for breakfast and sprouts for lunch if you want to lose weight.

It’s not true that you can never eat chocolates or ice-creams or wafers if you want to lose weight.

It’s not true that you must drastically cut down on starches if you want to lose weight.

It is true that dropping a few kgs is a cinch once you’ve discarded a few myths about food.

It is true that you can eat up, fill up… and not fill out.

Here’s the secret to how to do it:

It’s a basic principle of weight loss: To drop pounds, you eat less. The only question is what to eat less of. It’s logical to assume you need to eat less of everything – an approach that’s long held sway with dieters and nutritionists alike. But most diets that restrict total calories are doomed to failure: Eventually you have to give in to your body’s rightful craving for nutrients. Instead, new research shows that to lose weight, we need to mostly cut one kind of calorie: fat.

People tend to think they need a balance between the numbers of calories they eat and the number they burn off. But fat tips the balance. Too much of it in the diet can cause you to gain weight even if you’re not overeating.

Fat makes us gain weight because it’s stored in the body far more easily than either carbohydrates or protein. The body burns those for fuel and muscle-building almost immediately, while the more calorie-dense fat burns slower and is more likely to be left over. Furthermore, it takes a lot of energy to turn carbohydrates and protein into flab – almost a quarter of carbohydrates calories are burned up in the conversion process alone. When fat is turned to flab, however, almost none of it gets burned.

According to the experts, cutting just fat is considerably easier than shorting yourself on total calories, and it’s more likely to result in permanent weight loss. Furthermore, you can eat a diet low in fat and never have to force yourself to go either hungry or mad with cravings. It’s a misconception that cutting back on fat means giving up all the foods you love. There are no bad foods, only bad eating habits, which are easy to change if you take things one step at a time.

[Read: How Adequate Is Our Diet?]

Here are the steps experts recommend we take.

Cutting fat shouldn’t be an all-or-nothing crusade. You’re far more likely to succeed with a low-fat diet if you ease into it, making the simplest alterations first, then gradually taking on more difficult changes as you go. Look at what you’re already eating and how you could eat the same foods with less fat. Some suggestions:

Subtract add-on fat. A lot of the foods we eat are naturally low in fat – potatoes, wheat, pasta, bread, fruit and vegetables, for example – until we heap them with extras like ghee (clarified butter made from the milk of a buffalo or cow), butter, dressings and sour or whipped cream. Start by using less of such fatty add-ons.

Drink low-fat milk. If you drink whole milk, switching to skim milk can cut your fat intake substantially. Start gradually. If you don’t like the taste of lower-fat varieties, first combine skim with whole milk, gradually increasing the amount of skim in the mix.

Buy lean meats. There’s room for red meat in a low-fat diet if you make the right choices and eat it only two or three times a week. Best choices include lean cuts like sirloin tip which gets less than 40 per cent of its calories from fat. Go for small portions of no more than 30 or 40 gm. (about the size of a deck of cards,) trim all visible fat off before cooking, and prepare it by boiling or baking.

Eat less fried food. That means all types of fried foods, including chicken and fish. Cooking anything in oil boosts its fat content considerably. Even lean poultry meats become fat-laden when they’re deep-fried. Go instead for boiled or baked food.

One of the most important findings about diet and weight is that if you replace fat with other foods, like carbohydrates, you can actually eat more and still lose pounds.

In one study, when people on a moderately high-fat diet were told to maintain their weight for 20 weeks while switching to a low-fat, high-carbohydrate diet, they lost more than 11 per cent of their flab and 2 per cent of their total body weight. This despite their best efforts to keep pounds on.

Because carbohydrates burn faster than any other kind of food, they keep the body’s metabolism revving higher, and so you require more calories for fuel. And the leaner you become, the more high-energy food you need. Carbohydrates are found in a wide variety of foods, including cereals, breads, beans and most fresh fruits. Besides eating more of these experts recommend you do the following:

Focus on fibre. Once in the body, fibre tends to attract fat and bind with it. Because fibre is indigestible, it’s quickly excreted, which speeds fat through the system before it has time to be absorbed into the blood and stored as flab. Most high-carbohydrate foods are naturally loaded with fibre, but any kind of processing depletes them of it. When possible, eat foods whole, leaving fibre-rich skins on fruits like apples, for example, or choosing wholegrain breads and cereals.

Watch sugars. Sugar is a carbohydrate and won’t make you gain weight on its own. However, many foods high in sugar are also high in fat. A chocolate bar, for example, gets more than half its calories from fat.

HAVE A GOOD BREAKFAST

You’re running late, you need to make a call before leaving the house; you can’t find your good shoes… breakfast anyone? There’s a tendency for many of us to just have coffee in the morning, or maybe grab a cookie on the run. That’s unfortunate, because eating a good breakfast is an easy and effective way to fight flab.

Researchers theorize that breakfast-eaters tend to eat less fat and more carbohydrates than breakfast-skippers. Breakfast eaters also do less impulsive snacking and are generally less hungry all day long, particularly in the mid-afternoon and evening. A lot of overweight people who skip breakfast also have a light lunch, then come home at night and eat a huge dinner.

[Read: Your Daily Routine For Better Health – From Waking To Going To Sleep]

Diet is becoming a dirty word among nutrition experts. Not only are diets usually unsuccessful, but over time, repeatedly losing weight and gaining it back can make long-term weight loss more difficult.

When you diet by cutting calories, you lose not only fat but metabolism-revving muscle as well. When you gain weight back, it’s mostly fat.

Meaningful change should be gradual, steady and pleasant enough to become a comfortable part of daily living. The important dictums of a fat-free lifestyle are these:

Splurging is allowed. If you feel too deprived, you’ll eventually just say, ‘let’s forget the whole thing.’ One expert advocates following the “80/20 rule.” If you eat low-fat 80 per cent of the time, you shouldn’t feel guilty if you take some liberties during the remaining 20 per cent of the time. That way, you can indulge when you’re out on the town, dining with friends or over at the in-laws’.

Exercise regularly. Eating lean is only half the picture. In study after study, people who were best able to maintain weight loss were exercisers, even if all they did was take a daily walk. In one study, men who exercised gained back half the weight of men who only dieted. Any kind of exercise helps. Twenty minutes of aerobic exercise burns flab by boosting the body’s metabolism. Weight-training builds muscle, which makes the body’s fat-burning machinery more efficient.

Eventually, eating low-fat becomes second nature, experts say. When it does, consider yourself a success.