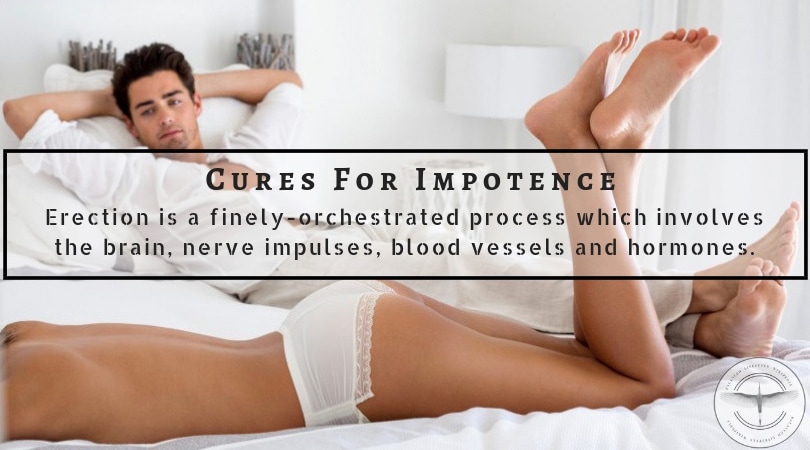 In the brave new world of the Bionic Man, the male of the species, impotent though he might be, may well be able to have an erection without even sexual desire or arousal – penile implants see to that. The most sophisticated model has now arrived; and other interesting possibilities are on the anvil.

Until a few decades ago, if a man went to his doctor with a problem of impotence (few did, in the first place), the doctor would most probably have told him that it was “all up there” (meaning, in his head). You couldn’t blame the doctor either, because at that time he didn’t know better.

But, with rapid improvements in diagnostic methods, beginning from the early ’70s, researchers discovered new, hitherto undetected physical causes that could underlie at least half of all impotence cases. We know today that a man can’t get an erection just by wanting or willing one.

Erection is a finely-orchestrated process which involves the brain, nerve impulses, blood vessels and hormones. Sexual stimuli reaching the brain prompt it to send message via the spinal cord to the penis. These messages (or electrical impulses, really) cause the two spongy-tissue chambers of the penis to engorge with blood; about five times the normal amount of blood fills the penis, causing it to become rigid and tense – an erection.

But any one of a number of things can go wrong. Diabetes, by causing nerve and/or blood vessel damage, can impair erection (About half of adult diabetics suffer from impotence in some degree). Cardiovascular disease (in which the arteries get narrow and hardened) can decrease the blood flow to the penis. Surgery (e.g. prostate surgery/bladder surgery) can result in nerve damage. Even certain medications, especially those for high blood pressure or for angina pain, can depress the libido, indirectly resulting in impotence.

Depending on the cause, there are a variety of treatment options, ranging from injections that dilate the blood vessels and improve blood flow to the penis, to surgery to tie up leaky veins.

But if nerves or blood vessels have been permanently damaged, a man might have no option but to settle for a synthetic erection: the penile implant. The penile implant, says consultant urologist & andrologist B.G. Parulkar, is one more step in the making of a bionic man. Just as you can have false teeth or an artificial hip, you can now have an erection courtesy a mechanical device.

There are three types of penile implants. It consists of a pair of silicone rubber rods which are inserted into the shaft of the penis. The result: a device that’s firm enough to give a man a permanent erection. In fact, that’s what it is: a 24-hour erection, except that the device can be bent down and positioned close to the body (perhaps under a jock strap) for concealment. This implant is the least expensive one and its mechanical simplicity allows for easy surgical installation. However, it has limited rigidity as well as flaccidity.

The second type of implant is the self-contained implant. This again has two silicon cylinders inserted in the penis. Each cylinder has its own fluid reservoir and pump. By pumping the tip of the penis, the person draws fluid from the reservoirs into the cylinders, causing them to inflate and mimic an erection. By squeezing the deflation site later, he can return the fluid to its reservoir and the penis back to flaccidity. However, the erection obtained with this implant is not as “full” as a natural erection. Some models have been known to buckle during intercourse.

Finally, there is the three-piece inflatable penile implant, the most sophisticated of the three (also, the most expensive). It consists of silicon cylinders implanted into the penis, a fluid reservoir implanted under the abdominal muscles; and a pump, implanted in the scrotum. All three parts are interconnected with tubing.

To activate it, a man squeezes the pump in the scrotum; the pressure causes the fluid to be suctioned out of the reservoir into the cylinders implanted in the penis. The cylinders expand, causing the penis to grow larger and rigid. After intercourse, the man presses a small release valve on the pump to return the fluid to the reservoir. In terms of penile length and girth, this implant comes closest to mimicking a natural erection.

The first three-piece implant was devised by Dr. Brantley Scott in 1973 at Baylor University, U.S., and was christened the Scott inflatable. It was not a resounding success, to begin with. The problems ranged from mechanical complications (cylinder and tubing breakdowns, reservoir leakage and pump malfunctions) to surgical error and even rejection of the implant. Attorneys in the U.S. filed anti-implant suits, lodging claims against surgeons, manufacturers and clinics. “When we first started putting in penile implants, our failure rate was almost 100 per cent in some patients,” says Dr. David M. Barrett, professor of urology, Mayo Clinics, U.S.A.

But the device has been streamlined over the years, and today, says Barrett, “I would say that we should see at least a 95 per cent (surgical) success and mechanical reliability rate. Anything less than that would be a surprise to all of us. Of course, one has to keep in mind also that we’re dealing with bio-mechanical materials and engineering and that, with time, there will be a mechanical failure rate.”

According to AMS Regional Director Garry Eckford, the device has been tested in the lab for 50,000 functional cycles. (Of course, as Dr. Barrett qualifies, “The human body is different from a lab.”)

Who is most likely to benefit from the three-piece implant?

It is really the device of last resort for physical impotence; and since it is an expensive procedure, not to say an invasive one, involving surgery, urologists will first attempt other treatments. Using it also involves an extent of finger dexterity (to operate the pump), so is not recommended for, say, patients of Parkinson’s disease. Diabetics with permanent nerve damage are highly eligible candidates; at the same time, diabetics run twice the risk of surgical infection as the general population (2 per cent).

The surgery itself is one-hour procedure and can be performed only by a specially-trained urologist. It requires hospitalization and a period of rest thereafter, since some discomfort and pain are present. Like any surgery, it carries the risk of infection. Other risks include surgical error and the possibility of extrusion of the implant into the penis. Surgical revisions may be required in about 5 per cent of patients over the first five years.

Sexual intercourse can resume within four to six weeks after the operation. And how good does the post-implant experience promise to be? We need to be clear about a few things. First, an implant will not give you an ‘erection’ in the strict biological sense: it will only give you a rigid penis. There is no engorgement caused by a rush of blood to the penis; all that is ensured is the upward mobility of your penis.

Nor should you expect that the implant will be a panacea for all your sexual problems. It will not increase your desire nor improve your sexual skills. An erection (whether it’s the real thing or a mechanical substitute) is not synonymous with either orgasm or ejaculation. The furthest that either implant surgeons or implant manufacturers can go is to say that, “If you were capable of orgasm or ejaculation before the implant, you’ll be capable of them after the implant.”

Then, of course, one needs to ask the wives how they feel about it. Some urologists happily claim that the wife need not even know – but whether sexual harmony is promoted by furtive secretiveness on the marital couch is a moot point.

Again, an “instant erection” may well result in attempts at “instant entry”. Even as things stand, most men do not bother too much about foreplay, and the penile implant gives them all the more reason to bother even less.

Finally, what happens to the human aspect in sexual relations – all those cuddly, lovably silly things you do to build arousal and get you and your partner into the warm cocoon of the love-world? With an implant, you can do away with desire. The point is: do want to? “The use of an implant, like the use of an injection to get an erection, changes the spontaneity of sexual functioning,” says Barrett. “And couples do have to adjust to that”. It calls for a great deal of understanding on the part of the wife; and tremendous sensitivity to her sexual needs on the part of the husband.

If you have an impotence problem, and the three-piece implant sounds like the answer to your prayers, we suggest you carefully consider these questions:

Meanwhile, the search continues for other ways to get a man’s penis to rise to the occasion. A few of the more promising options:

Electrical Stimulation: According to Dr. Barrett, “A lot of work has been done to develop a trans-rectal probe (in the rectum) to stimulate the pelvic nerves and cause an erection. This has been done very repeatedly and very effectively in primates. It’s also been attempted in humans. In san Francisco, for example, there’s group of scientists who are working with electrodes implanted directly on the nerves that go to the penis. In humans, there appears to be some discomfort involved, including pelvic muscle spasms. But, once that problem has been overcome, this may well be an additional treatment mode for impotence someday”.

Drug Delivery Systems: We already have insulin pumps – pumps implanted in the body, which will, on a daily basis and at a pre-determined time, inject insulin into the body, so the person doesn’t have to do it over and over. “Experimentally, a similar kind of device has been implanted in the penis and, by depressing a button a man can subcutaneously deliver the drug directly into the penis without having to stick himself each time. It is re-loaded transcutaneously, by piercing a needle into a machine and ‘re-charging’ the device with the drug.”