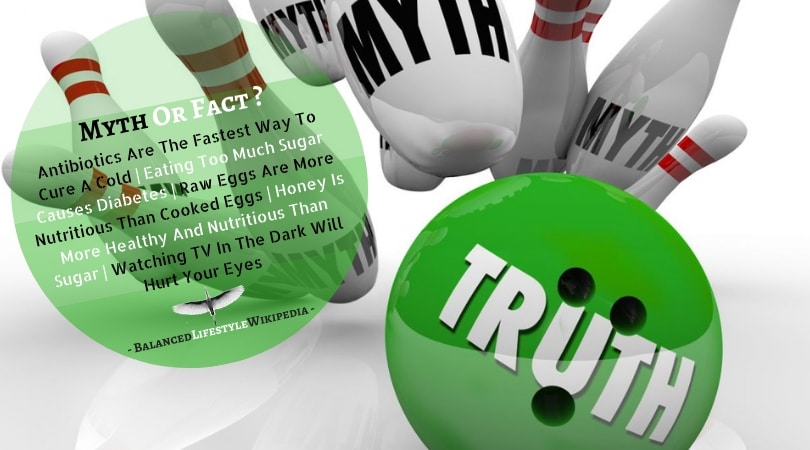 MYTH #1: ANTIBIOTICS ARE THE FASTEST WAY TO CURE A COLD

FACT – Unfortunately for the millions of us who annually fall victim to the common cold, nothing has yet been discovered that will cure it. Antibiotics are entirely ineffective for the simple reason that antibiotics fight bacteria, but not viruses – and the common cold is caused by a virus.

What fights it? Your body’s own immune system: cells infected by the virus release interferon, a protein that jump=starts the production of antiviral chemicals in the body. The running nose, sneeze, coughs and “congestion” – all those symptoms that add up to so much misery – are all part of the body’s attacking action, its attempts to dislodge the invader. When this has been successfully accomplished, your cold is “cured”. This is irrespective of whether you have taken any medications (including antibiotics) or not: While aspirin, paracetamol, anti-histamines and cough syrups can help relieve the symptoms of a cold, i.e. the aches, fever, sneezing and throat irritation, they can do nothing at all to cure the cold itself. That is why the popular truism that a cold lasts 7 days if you don’t treat it and one week if you do.

Antibiotics taken uselessly for a cold (and, in fact, prescribed for it by far too many doctors simply because they don’t want to send the patient home empty-handed) can in fact do more harm than good – and not only to your wallet. Antibiotics usually kill a lot of helpful bacteria, as in the intestinal tract, along with the bad ones. Each one of the available antibiotics is potentially risky for certain people who may be allergic to it. And an extended course of an antibiotic, or its frequent usage, can desensitize your body to the drug – so that, if you eventually do need it to fight a more serious infection, it’s useless because your body has developed resistance to it.

Do antibiotics have any role to play when a cold attacks? Yes, among certain vulnerable groups like asthmatics, diabetics, the old, underweight babies and those on steroids. This is because the viral infection (i.e. the cold) makes heavy demands on their (already weak or compromised) immune systems, leaving them more susceptible to bacterial infections. To prevent this double whammy, doctors may – justifiably – prescribe antibiotics for these vulnerable groups. The antibiotic would work to keep possible bacterial invasion at bay while the body fights back the viral attacker.

For the rest of us, simple relief measures are all we really need – steam inhalations to clear a congested nose, plenty of fluid intake to thin the mucus and flush out the virus faster, salt-water gargles to relieve a sore throat, the viscosity of honey to soothe a cough-racked throat – and lots of bed-rest to help the body get on with its job.

FACT – Parents admonish children, friends admonish friends and sometimes even doctors admonish their patients to go slow on sweets ‘or become a diabetic’. This myth puts the cart before the horse. Normally, i.e. in those persons not susceptible to diabetes, no matter how much sugar, sweets or chocolates are wolfed down, the pancreas produce enough insulin to neutralize all the excess within two hours of eating so as to bring the blood sugar level back to normal. The more sugar you eat, the more insulin is produced. However, in diabetics, sugar intake is restricted because the body does not produce sufficient insulin to regulate and neutralize the sugar which then accumulates in the blood, causing problems.

So, while sugar does not cause diabetes, those who are diabetic must cut down on sugar because their bodies cannot cope with the excess.

However, sugar does contribute to obesity (especially if you keep hogging and remain sedentary) – and obesity increases the body’s resistance to insulin, making it tougher for the hormone to perform its job efficiently.

FACT – this is a very common belief, but the opposite is, in fact, true. All the “Rocky” movies notwithstanding, dropping a raw egg into a beer, or into a blender with milk and wheat germ, is not a very good idea. Nor, for that matter, is the “good” old eggnog.

There are several reasons. First, raw eggs are not easily digested as cooked eggs. The albumin (protein in the white of the egg) contains an anti-digestive factor that is destroyed by heating.

Secondly, eating raw eggs can hinder the absorption of biotin, a vitamin of the B group. In the egg white, biotin exits in conjunction with the protein avidin which binds with it. This avidin-biotin complex is not absorbed from the intestine. But, when the egg is cooked, the combination is broken down and biotin is released for absorption. Gastro-enterologist F.P. Antia cites research on animals fed on raw eggs who developed a syndrome called “egg white injury” as a result of biotin deficiency; the symptoms included dermatitis, roughening of the fur, weight loss and a spastic gait. A similar deficiency, he says has been produced in humans by giving them desiccated egg whites.

The bigger problem with raw eggs is that they may ne nesting grounds for food-poisoning bacteria, mainly salmonella. This happens because the eggshell is porous, so if the egg is laid on dirty, marshy land, or in any other unhygienic environment, micro-organisms can permeate it. The salmonella bacteria can cause particularly unpleasant consequences, including nausea, vomiting, gastroenteritis and typhoid. In the elderly or the ill, the outcome can even be fatal.

Salmonella is destroyed when eggs are well-cooked, i.e. for at least 5 to 7 minutes. Soft cooking (three-minute eggs, sunny-side-up eggs, and soft omelettes) may not be as effective.

MYTH #4: HONEY IS MORE HEALTHY AND NUTRITIOUS THAN SUGAR

FACT – Honey has been endowed with a bounty of healthful properties – from being a powerhouse of nutrients to being an across-the-board cure for human ailments. But when you strip away the mystical aura, you’re left with what is largely mythical. The hard fact: Honey is a sugar, as good or as bad as your much-maligned table sugar. One comes from sugarcane, or sugar beet, the other from the bees, but both are almost purely sucrose: a combination of glucose and fructose. As such, their main nutritional worth lies in the high energy they provide. Gram for gram, both contain virtually the same amount of calories. Honey has negligible amounts of potassium, iron and selenium – hardly a nutritional praise’s worth.

Honey can contribute to dental decay just as sugar does; and, like sugar, it raises blood sugar levels in diabetics. Honey has one additional minus point. It may contain the bacterium, clostridium botulism, which can produce infant botulism.

Both, honey and sugar (applied externally) have been founded to promote wound-healing. This apart, the only other clinical use that has been established for honey is that, because its natural viscosity (sticky cohesiveness), it temporarily coats scratchy coats and thus soothes the irritation produced by coughs.

MYTH #5: WATCHING TV IN THE DARK WILL HURT YOUR EYES

FACT – Popular advice is off-base on this one. “Whatever lighting you find comfortable is fine when you watch the tube,” says Andrew Farber, M.D., ophthalmologist and former spokesperson for the American Academy Of Ophthalmology. After all, staring at a TV screen in a dark room is no different than staring at a movie screen in a dark theatre. The light just isn’t bright enough to cause any damage to your eyes. And while we’re on the subject, here’s another myth you may have heard that is just that:

Don’t sit too close to the TV, or you’ll get radiation poisoning. Go ahead and sit where you like. One caveat: You may have problems focusing when your nose is only inches from the screen.