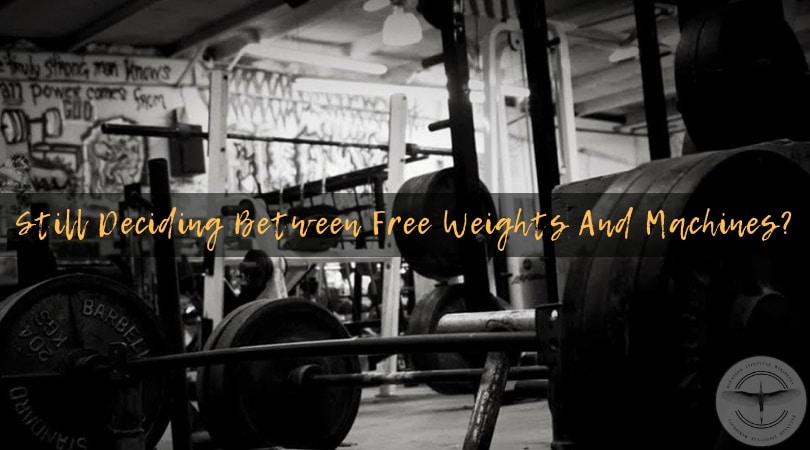 HERE’S HOW TO GET THE MOST OUT OF BOTH

Walking into most modern gyms or health clubs, you are usually faced with an enormous choice of training equipment. In addition to racks of barbells and dumbbells, there is a wide variety of exercise machines – using cables, pulleys, stacks of weights, individual weight plates and, in some cases, even employing water or compressed air to provide the resistance needed to build muscle.

It’s obvious that resistance training has come a long way in the past several decades; it wasn’t long ago that hardcore gyms were best described as nothing more than dungeons and it’s tempting to give the modern, sophisticated training equipment credit for this transformation. But training knowledge has made tremendous progress in the past 50 years or so and looking back, the workout programmes of the 1940s and 1950s seem almost as primitive as the equipment that was being used.

So the question becomes, how much have these changes been brought about because of innovations in training equipment (hardware) and how much stems from greater knowledge of how to train and diet (software)?

“I began training in the 1940s,” says legendary physique star Reg Park, holder of the Mr. Universe title and Arnold Schwarzenegger’s idol when he first began bodybuilding. “We trained like weightlifters in those days, working the entire body in one session, three times a week. We did a lot of weightlifting movements, but not many isolation exercises. We were also handicapped by very primitive equipment. I didn’t have a bench to use, so I’d do barbell chest presses lying on sandbags to lift me far enough off the floor to give my elbows room to drop below the level of my torso.”

Park competed in bodybuilding through the 1960s and describes a gradual evolution during his career of both gym equipment and training knowledge. “It was a great advantage having various different kinds of benches to use and equipment like leg press, pulldown and leg extension machines,” he says. “But during this period we also learned the benefit of exercise principles like split system training – working only part of the body in each training session – and including a lot more isolation training for developing and shaping individual muscles and muscle groups.”

RAGE AGAINST THE MACHINE

Modern equipment and training knowledge evolved side by side over the past 50 years or so – the one with the other. But that still leaves people who are trying to put together the most effective weight training programme with a dilemma: given so many choices of equipment, how much should you rely on traditional free-weight training and to what degree should you utilise machines and cables? Which is more effective and for what purpose? And if both should be included, how do you decide which to use for what goal?

As far as park is concerned, as well as other stars of the past like Larry Scott, Frank Zane and even Schwarzenegger, you need to emphasise free-weight training and basic multi-joint exercises in order to build muscle. “You can certainly improve your physique doing mostly isolation exercises with machines and cables,” Park explains. “But when it comes to really building solid muscle and increasing strength, you need to rely on barbells and dumbbells and exercises like the bench press, squat, deadlift, bent-over row, shoulder press and other movements that involve multiple joints and a lot of muscle tissue working at the same time.”

Of course, the best way to develop pre strength is by a programme of weightlifting (powerlifting or Olympic lifting), but most people are more interested in muscle size and definition rather than just strength, which calls for training like bodybuilder. Muscle shape and volume is created by a combination of sufficient resistance and an adequate number of sets and reps, rather than working against maximum resistance. That’s why bodybuilding is about split-system training (working a different part of the body each training session) and training the muscles from all different angles with a variety of movements.

“Barbells are ideal for developing maximum mass, thickness and strength,” Park explains, “since you are holding the bar with both hands and using as many muscle fibres as possible. But dumbbells are also useful, since they allow you to isolate one side of the body from the other – so each side has to work as hard as possible without help from the other – and to work through a longer range of motion than is possible when there is a bar to limit your movement.”

The benefits of free weights are:

What is the difference between weight and resistance? Push against a wall as hard as you can and you’ll experience a lot of resistance. But the wall isn’t heavy unless it starts to topple over on you. Now, stand under a heavy barbell for a squat or lie on a bench holding a heavy barbell at arm’s length above you, fighting against the pull of gravity and you get the experience of a heavy weight. Having to control it causes a response from the nervous system, and more muscle fibres are recruited. The stabilising muscles of the joints are brought into play as well. If your muscular activity were being monitored electronically, you would see a sudden spike in neuromuscular response. The body has evolved over time to respond to working against gravity and it doesn’t recognise the demands of machine resistance to the same degree.

“There is a psychological effect as well as a physical one,” Park says. “Your mind can wander during leg presses on a machine, but there is no way you can’t pay attention when you’re squatting under a heavy bar.”

Many beginners are reluctant to train with free weights specifically because of this element of danger – whether real or perceived. But Park has a simple suggestion in this case. “As with any kind of progressive training, just start out very light, at the point where the exercise is easy for you and then gradually work up to heavier weights as you get used to the movement. Just take it one step at a time.”

In general, it’s best to use free weights near the beginning of each bodypart workout, while you’re fresh and strong and to do your isolation training, including using machines, later on in your programme.

Free weights are very simple exercise devices; it’s the increased knowledge of how to train that has made them so much more effective today. But the completeness of the contemporary physique – the development and detail of all the various muscles of the body – would be extremely difficult to achieve without the use of machines and cables.

There is a concept in exercise called specificity of training, which theorises that you tend to get the specific result that you’re training for – whether you realise what you are training for or not. Free-weight training is more generalised in its effect; machine training tends to be much more specific.

For example, if you were to train over time on a bench press machine and then switch to a barbell bench press, you would probably be disappointed with how much weight you could lift on the latter. Training on a machine tends to make you stronger specifically on that machine, while working with a free weight creates more general strength. After all, on the machine you are pushing against resistance along a track – the strength curve of the machine (how much resistance you encounter at each part of the full range of motion) is predetermined and your joints are not required to stabilise the movement.

Therefore, the result of machine presses would be that you could:

Just remember, you won’t develop the overall mass and strength that you could be doing a barbell or dumbbell press.

Of course, machines and cables are very valuable when it comes to rehabilitation or training around an injury. Go into any good physical rehabilitation facility and you’ll see a number of exercise machines used to build up weakened or injured joints or tissue while protecting against overstress. But even if you are only suffering from a strained muscle, mild tendonitis or some other minor problem, you’ll often find that using machines allows you to continue your workouts while letting the affected areas rest.

“Doing bodybuilding training,” says Park in summation, “you are a little like an car mechanic. The mechanic has a lot of different tools to make use of – big pieces of equipment like hydraulic lifts and air compressors, and smaller ones like spanners and screw-drivers. He makes use of the tools that the job calls for – you wouldn’t try to inflate a tyre with a pair of pliers – but he also has to know how the machine is designed to operate and what the proper procedure is to fix it.”

The right tool for the right job (hardware/equipment) and knowing how the job should be done (software/knowledge) – are essential to both auto repair and effective bodybuilding training.