Can Women Do More For Peace In The World Than Men? 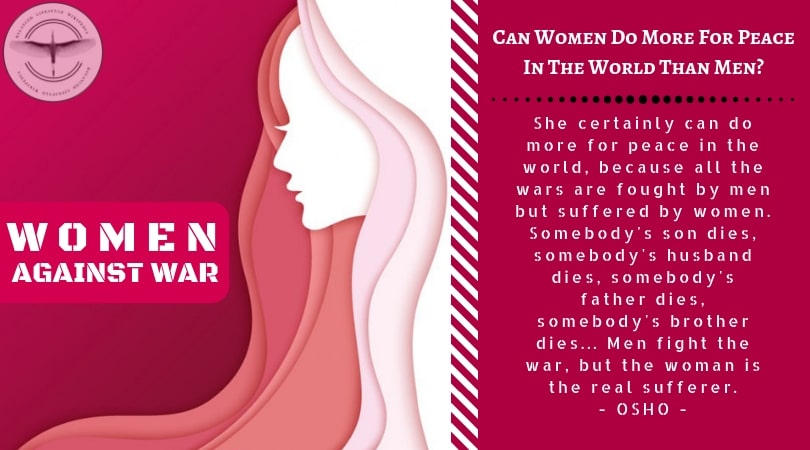 You will be surprised to know that whenever an army invades a country, they kill men and they rape women. That is very strange. Even then, there is a difference. They kill the man… But they are full of sexuality, repressed sexuality; all soldiers are repressed sexually. Soldiers and monks, these two are the most sexually repressed people in the world. The woman is the victim: she is raped. And for thousands of years it has been going on.

The woman can do much if she is allowed to have an equal part in all the decisions that are made about life, war or anything. The woman cannot be for war, and there should be a movement of women against war – it may be man’s game but why should woman suffer for it? Remember, half of humanity consists of women, remember. If half of humanity is against war, it is impossible to bring another war into the world. And woman can fight all efforts against peace in many ways; every woman should try to prevent war.

Right now you have been told to do just the opposite. In the World War II women were preparing clothes, sweaters, woollen coats for the soldiers. Not only that, women were even offering their bodies to strange soldiers because they were fighting for the country – and this was thought to be virtuous.

Man is very cunning. He can call anything virtue whenever it is serving his purposes, otherwise it becomes vice – the same thing! For murdering a single man there is a death penalty. For murdering hundreds of people… For the murdering of Hiroshima, Nagasaki, President Truman should have been hanged immediately so no other politician ever tries any ugly thing like that again. Two hundred thousand people died within five minutes – and for no reason at all, just that President Truman wanted to experiment with the atomic bombs. Using two hundred thousand people as guinea pigs…?

The woman just has to fight it in her family. If every woman fights it in the family and does not allow anybody in the family to go to war, all armies will be dispersed. Force people to come back home, to retire from the army. “We don’t want you to get gold medals, we want you to live a human life amongst human beings.”

Just leave the politicians. If they want they can have a wrestling match, a boxing match, do to each other whatsoever they want to do. “Kill each other, we don’t care!” Let their fighting instinct be satisfied. The president of America can have a wrestling match with the president of the Soviet Union, and the whole world can watch on the television and enjoy. It would be such a great entertainment. And who cares who wins or who is defeated? It harms nobody.

The real thing is that the people who create war don’t go to war; all the great generals remain behind. Only the poor soldiers are fighting and are being killed. And when the victory is declared, then the victory is of the generals – General Eisenhower becomes victorious, or General MacArthur becomes victorious – and these are the people who have not gone to fight at all. They have been hiding behind, and behind them were their presidents and prime ministers. It is a very strange game. You want to fight, and unnecessarily other people who don’t want to fight are being sent to fight and destroy each other.

A world consciousness has to be aroused, so that soldiers – even if they are SOLDIERS – should go to war just to have a chit-chat with the other party and come back… and let us see what happens. There is no need to shoot anybody, there is no need to kill anybody. You can play cards, you can do anything for the whole day and come back by the evening.

Eighty percent of humanity’s capacity goes into war. If this same eighty percent of resources went into farming, into gardens, into factories, this earth would be a paradise. The dream that your seers and prophets used to have of a heaven in the sky can now be created here on the earth, there is no difficulty in it. But old habits. “This is our country, that is their country.” We have to fight, they have to fight.

I am not an enemy of the nation, you may call me a traitor to the country, in the sense that I am not a traitor to humanity. My idea is simple, this whole earth is one. I want to abandon the small for the vast.

These tiny enclosures, these boundaries and fences, have troubled man too much. In three thousand years, five thousand wars have been fought. In the past when they fought wars with bows and arrows it was okay, there was not much harm done; if a few people died there was no problem. But now war is total war. Now, it is the suicide of all of mankind. Now, the whole place can become a Hiroshima – any day, at any moment. Consider the horror of such a war and think of how much energy is going into it. This same energy could fill the entire earth with greenery, could fill it with prosperity. For the first time man could dance absorbed in bliss, could sing songs of ecstasy, could follow the quest of meditation.

Whoever on this earth who has received a small glimpse of the truth has no boundaries. They do not belong to any country, any community, any class, any sect, any caste. They belong to all, all belong to them.

Man has to become alert that war is so ugly, that it does not suit intelligence – it shows a very retarded mind; it is animalistic. Woman can certainly help immensely.