Being Plain – Does It Matter? 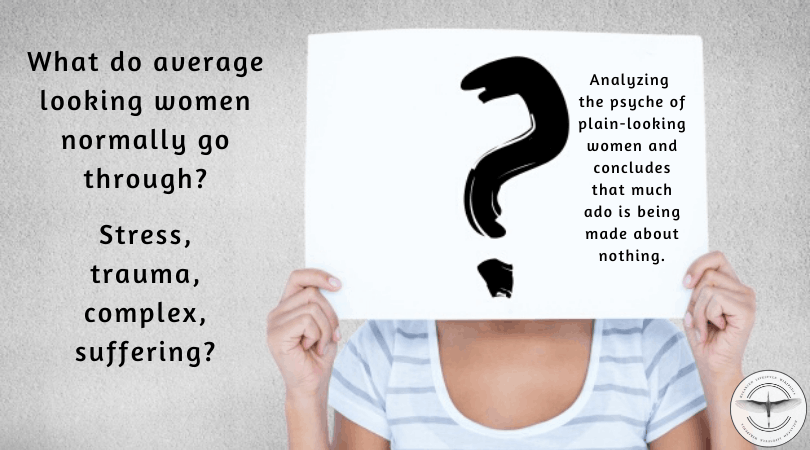 What do average looking women normally go through? Stress, trauma, complex, suffering? How detrimental could it prove to be? Analyzing the psyche of plain-looking women and concludes that much ado is being made about nothing.

In case you are a woman what would be the first thing that catches your eye when you go to a medical store to buy a strip of headache relief because your head is splitting and you feel you could do well with five of them? I’m a reasonably good looking woman and don’t get flustered over my looks or my clothes a lot, but then too I’d admit that I’m taken in by any new fairness cream or shampoo that’s squirmed its way into the consumer market and it’s the first thing that pops in front of my eye as the keeper nips at the strip of the headache relief. And mind you, I’m a good looking woman with a sensible enough mind who could do without all these attention grabbers. And I know very well that no shampoo on earth could overnight, turn her naturally dry, short and curly hair into a shining, silky mane cascading to the waist as the write-up on the bottle promises.

And still I’d most probably indulge myself a little and go for it under the pretext of trying it out but knowing very well within, it’s all because of the heart that pounds and says, ‘maybe, it could make a difference’. So that’s me; emerging from the medical with the slim, sexy bottle of the shampoo in my hand, an ethereal light of a visionary in my eyes, having forgotten all about the lesser and more mundane things of life like my head and its ache and the medicine I had once intended to buy; for which I had braved myself to come out in the thunder and the pelting rain and walk the slushy ground, having bordered and speckled my sleepwear with murk on the road. So there’s my valiant effort!

All for a shampoo – why can’t I cock my head in an impertinent manner like all those kids in school sticking their tongues out at each other and just not care – what or how my hair is, and ought to be? Why can’t I tell them all, to JUST SHUT UP and lurch ahead with my tousled head? I can’t do it. My status as a woman doesn’t allow me to. I’m supposed to pretend I want to look good. I’m supposed to be concerned about my hair and my skin and my figure and my clothes and pretend that there’s something miserably wrong with each of these even if there isn’t. This entire show, only because I’m a woman and I’m expected to put up my little enactment everyday, just as scores of others do. And it surprises me; when I sit for introspection once in a blue moon, that how I’ve conditioned myself and learnt to believe in this make-believe.

I do not need anyone except my mirror and my sensibility to tell me how I look. And then too… I need to keep reassuring myself. Does this happen to every woman? Why is a woman unable to buy even a hairpin without showing it to ten others and getting its worth and trendiness confirmed. And if this happens to a woman who’s reasonably good looking, how does a plain woman take it? A woman who knows, no amount of makeup or skin nourishers or hair styling can turn her into some paragon of beauty because she’s already spent a fortune trying them all. Does she learn to live with the truth? And if she doesn’t, what then?

It’s 9:30 and I’m aboard the streets of Washington DC. I look at the woman I ‘m brushing shoulders with – she’s dark, has a mole on her left eye, hair back in a bun, wears a sleepwear, furtively lips some song and smells of perfume. It all tells me that she wants to be beautiful and it does matter to her. Her plainness hurts her like a suppressed hiccup in her chest. She hasn’t learnt to live with it; unlike the woman I now turn to look at, without any style to her hair, wearing a crumpled sleepwear. I’m too far to smell her but I know she doesn’t bother to use perfume anymore: she’s just settled down to being plain. She just doesn’t care anymore. She’s left herself far behind and come a long way from that. A treble makes me crane my neck and I see a mouse of a woman, otherwise nondescript, bawling on how someone stepped on her ailing foot. I like her for I know she’s trying to assert herself, though in an absurd way and will not relent till someone turns around and reaches a hand through the crowd to soothe her and say a few kind words to her. That’s how she manages to make eyes turn around. Valiant effort! A better one than mine and obviously one reaping immediate fruits; for I’ve to confess – that shampoo did no good to my hair.

But it makes me wonder, isn’t there some other way to react or to go about life? In Morrison’s ‘The Bluest Eye’, Pecola Breedlove, a black girl in her puberty, suffers so much that it leads her to negate and loathe her black self and wish fervently for blue eyes. Blue eyes on a black face! How weird a wish; yet how justified if one gives a thought to what all she must have undergone and suffered. The obsession which initially seems to be just a crazy fantasy, in the end, proves to be damaging enough to drive her mad.

Do looks decide a person’s and for that matter, a woman’s worth? Isn’t there a by-lane that a woman could take without being one of the flock? Is appearance the only way for a woman to express and assert herself? Why all this song and dance about how you look? It’s nice to look good but what if you can’t help it? And is there any full stop to looking good? When you start looking good you’d probably want to look even better and channelize yourself towards achieving that. Look where it’s left you tottering. You’re trying to find a firm ground in shallow waters where the ground is seen but is all mushy, whereas your man’s far ahead trudging on hard earth.

Anyway, who has given anyone the liberty to evaluate a woman on the basis of how she looks? It’s woman herself. Was she always worried about the way she looked or is this a new fad with magazines, fitness programmes and health centres bellowing full-throated, about the NEED to look good, whatever that means, that cuts deep in her psyche, making her feel guilty and inferior if she doesn’t go to the ends of the earth and try it all out. And all this, mind you! Just to look good according to the newly-found standards of beauty. And when she’s finally through, what difference does it make except winning a few impassionated stares? She has the imprudence of simpering when she’s complimented on how she looks; in fact on how ‘good’ she looks now than she used to look before.

She is silly enough to let others pass their verdict on how she looks and how she ought to, and accepting her worth in terms of good, better and best based on her physical charms. She permits everyone except herself to decide her worth. And what happens when she falls a bit short and misses by half a point; the verdict drives through her like a knife slitting her, to which she either revolts, or succumbs, or still worse, endures! Why can’t she just overlook? Overlook those icons of beauty thrust at her from every possible corner, haunting her like elusive dreams? Overlook so that there’s no wound, no trauma, no insecurity, no suffering? Look within herself to find that which lies only in her, that which is unique in her, that which makes her different in her own respect and that which can truly, truly decide what all she’s worth and give her a reason to live and smile.