Be An Optimist In Two Weeks! 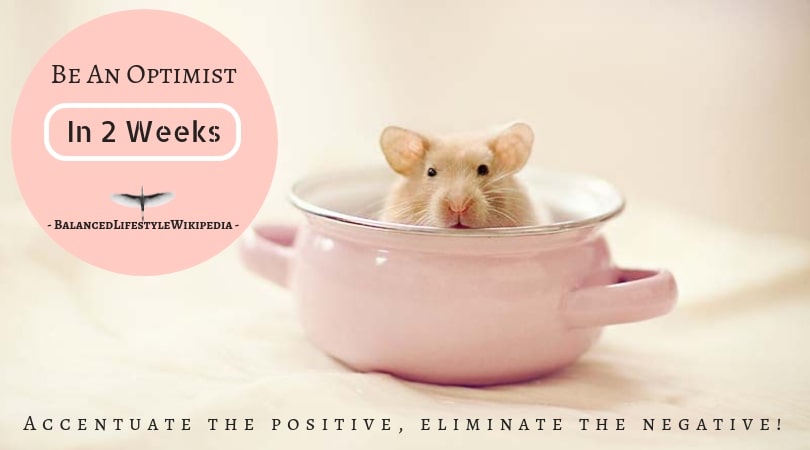 Accentuate the positive, eliminate the negative!

Wishing won’t make it so, but hoping just might – even in the situations that seem hopeless.

If you’re a pessimist, you conduct a bleak monologue with yourself.

Your boss doesn’t say “Good morning,” so you think, I messed up that presentation; I’m going to get fired. Or you watch a debate and think, Politicians are hypocrites.

If you scored more than eight points on the quiz on the last page, you are indeed a pessimist. You suffer in three ways: On average, you are more vulnerable to depression, you achieve less than your talents augur, and your health is worse than an optimist’s.

Can you change your way of thinking? Can you create the stuff of hope within yourself?

The answer is yes, but you will not be able to do so overnight. It takes about two weeks of optimism. I can’t convey all the skills of learned optimism in a few paragraphs, but I can tell you the essence of the change: Use a skill that you already have but that you don’t deploy in the right place.

This skill is called disputing.

At the office a rival jokes about your late hours: “Are you overworked or just disorganized?” You can reply, “Sometimes the only way to get a project in early is to stay late.” Or a catty friend teases you about the Dutch chocolate cake you’ve just ordered for dessert, and you say, “Don’t spoil the reward I’ve promised myself for going to the gym ever day this week!”

Thus you quite capably answer back when somebody needles you.

If you are a pessimist, however, you lay into yourself several times a day. You walk into a cocktail party, for example, and say to yourself, “There are a lot of high-powered people here. They’ll consider me a lightweight.”

Strangely, when such an insult issues from inside, you accept it. You believe it. You treat your own self-criticisms as if they were gospel.

Well, they are not. The accusations that pessimists launch at themselves several times a day are no more rational or well-founded than the ravings of a drunk on the street. They are vestiges of the voice of your big sister, your carping coach or your father in his worst mood.

Instead of accepting your automatic negative thoughts, dispute them. Listen closely to what you say to yourself when you face adversity. Now dispute that self-recrimination. Marshall all the evidence against it! Fight back!

Here is a scenario of an ace disputer in action:

Adversity I borrowed a pair of expensive earrings from my friend Kay, and I lost one of them while I was out dancing.

Pessimistic belief I am so irresponsible. Kay is going to be furious at me. I just can’t believe how much of a klutz I am.

Disputation It’s a shame I lost the earring. They were Kay’s favourites and she’ll be disappointed. But she knows that accidents happen. And this is the first time I’ve lost anything in a long while.

Disputing your automatic pessimistic thoughts is at the heart of optimism. Once you get good at it, you can actually watch your mood change from anger to calm, from down to up, in just a few seconds.