Are Women More Courageous Than Men? 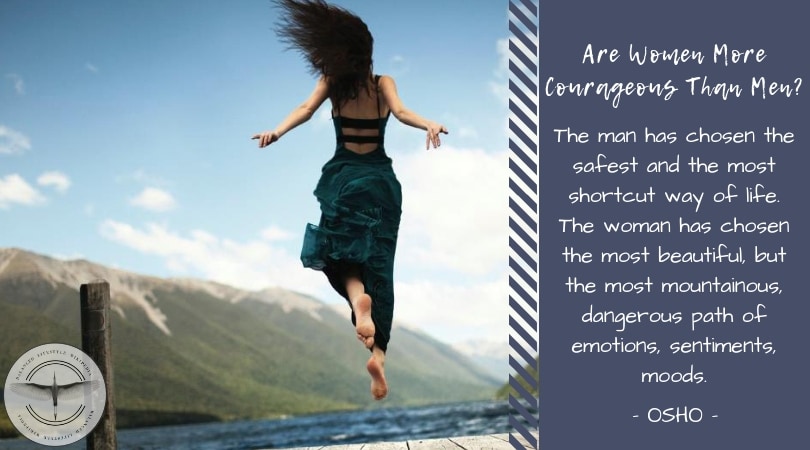 They certainly are. These are men just feeling jealous… nothing courageous.

The woman is more loving because she does not live by logic, by reason, but by pure emotion and heart.

The way of the heart is beautiful but dangerous.

The way of the mind is ordinary but safe.

The woman wants a world of the heart.

As far as I am concerned, the way to your innermost being is closer from the heart than from the mind. Mind is a shortcut if you are going outward, and heart is a very long way. If you are going inward, the whole thing changes into its opposite – heart is the shortcut to being, and mind is the longest way you can think of.

My emphasis on love has a basic spiritual reason. From the heart the woman can immediately move, and the man can move towards the heart without any difficulty. He has just been wrongly trained; it is only a conditioning. He has been told to be hard, to be strong, to be manly, and all this is nonsense. No man cries and lets his sadness or his joy flow through the tears because he has been told since he was a child that tears are for women, it is girlish. Men never cry and weep.

Looking to nature, the whole thing seems to be absurd. If it was so, if that was the intention of nature, then man’s eyes would have been made in a different way, they would not have tear glands.

They have tear glands just as women have.

What is the purpose of those tears? They are needed; they are a tremendously significant language.

There are moments when you cannot say, but your tears can show. You may be so full of joy, and tears come to your eyes. Tears are always the symbol of overflowing experience. You may be so sad that words cannot contain it; tears help you. It is one of the reasons why women go less mad than men, because they are ready to weep and cry and throw things any moment; temporarily they can go mad every day.

Man goes on accumulating, and then one day he explodes – wholesale. Women go mad retail, and that is a wiser way, to be finished every day. Why collect?

Men commit suicide more than women. This is very strange. Women talk of committing suicide more than men, but they never commit it. Men never talk about committing suicide but commit more suicide; the quantity is double. Man goes on and on repressing, goes on and on keeping a certain face which is fake. And there is a limit to everything: a point comes where he cannot hold it anymore and everything falls apart.

Man has to be taught to be more heartful because from the heart goes the way to being. You cannot bypass the heart. The woman is in a better position, she can go directly towards being from the heart. But instead of recognizing this immense quality in women, man has been condemning women. Perhaps there is a reason; perhaps he was aware of some superiority in woman – the superiority of love. No logic can be higher than love, and no mind can be higher than the heart. But the mind can be very murderous; the mind can be very violent, and that’s what the mind has done for centuries.

Yes, women have more love, but they should also be made aware of the other side of the coin. Man has logic. The other side can be illogical. It is not dangerous, it is just a mistake; it can be corrected.

That’s why I said the way of the heart is beautiful but dangerous.

To be loving one has to be more alert because you can fall into the ditch of hate which is just very close by. Every peak of love is very close; the dark valley of hate is surrounding the peak from everywhere – you can slip very easily.

One who really wants to learn the art of love has to remember all of these things, and has to save his love from falling into all these ditches of hatred, jealously; otherwise, going to the being will become impossible – more impossible than it is from the head.

The man has to drop logic and be a little more loving.

Logic can be used; it is utilitarian. In scientific work it is useful, but not in human relationships. Man has to be careful that logic does not become his only way, that it remains just an instrument he uses and puts aside. The woman has to be aware that she does not fall into hatred, into jealousy, into anger, because they will destroy her most precious treasure of love. And both have to move deeper in love; the deeper they move in love, the closer they will reach to the being.

To reach to your very center is to gain all that life can give to you – all the fragrance, all the beauty, all the joy, all the benedictions.