By: Jonathan
In: Health & Fitness 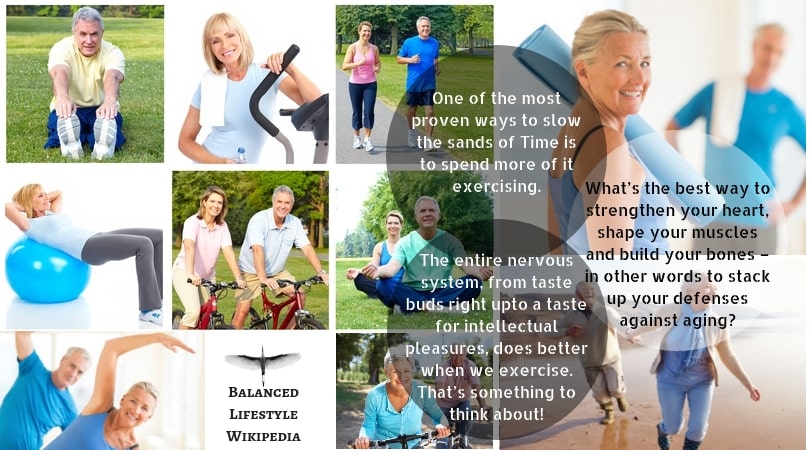 What’s the best way to strengthen your heart, shape your muscles and build your bones – in other words to stack up your defenses against aging?

One of the most proven ways to slow the sands of Time is to spend more of it exercising.

You’ve decided to fight aging all your way. And by now you’ve probably heard that exercise can be one of your best allies in accomplishing this. But which workouts will serve your purpose best? And how do you go about keeping your body younger longer if you’ve already got an iffy back or a tricky knee?

Here’s a simplified rundown on the best workouts to keep your heart, bones muscles and, yes, your brain, fighting it:

BEST FOR STRENGTHENING YOUR HEART

The more scientists learn about heart-helping exercise, the less they think you have to break sweat. A ground-breaking study found that just walking two miles in half an hour four times a week improves or maintains heart-and-lung fitness enough to increase your chances of living longer.

What this means to you: For starters, it doesn’t mean you have to begin walking four times a week. Translate that formula into its three basic components and you can design your own heart-strengthening programme.

[Read: Walking – A Way To Nurture Your Mind, Body, And Soul]

Note: Stepping can be hard on knees. To avoid problems, place your foot flat on the bench with each step; don’t bend knees more than you would climbing stairs; and don’t step back so far that you can’t easily get your whole foot down.

BEST FOR BONING UP:

By now, most health conscious people have heard about the bone-crumbling effects of osteoporosis, the latter-year disease to which women are particularly prone, apparently because of their smaller bone structure.

The crucial fact about osteoporosis is that, to prevent it in old age, you’ve got to start taking actions in your twenties. You need three components to ensure strong bone: exercise to stimulate strong bone formation; calcium to mineralize that new bone; and estrogen to improve the absorption of calcium and to protect against bone loss.

Traditional wisdom had it that bones could be strengthened only through weight-bearing exercise in which the body is supported by the feet – running, walking, jogging. But today we know that strength-training exercise such as working with weights – while it doesn’t cause direct impact – stimulates bone growth by pulling on the muscles attached to the bone.

The following chart rates various activities according to how beneficial they are as bone strengtheners.

Aim for thirty to sixty minutes of cardiovascular work from the “Most Beneficial” Category, three to four days a week, followed by 20 minutes of strength training at least twice a week.

Aerobic exercise often helps make achy backs and joints feel better because it increases blood flow and relaxes tense muscles. If you’re suffering from a bad back, no one but your doctor can tell you exactly which workouts to do (or not), or how soon to ease into them after a serious problem. Still, there are some basic, and helpful, guidelines:

So what should you do? Smartest choices are moderate walking or swimming. Also, the following back-specific exercises are time-tested:

Two easy leg exercises are enough to help you become steadier on your feet. All you need is a pair of strap-on ankle weights available in most sporting goods stores.

It was reported in a study on nine elderly, frail men and women who did knee extension exercises for eight weeks, using a simple cable and pulley weight machine. The participants more than doubled their leg strength and their walking speed and balance improved by almost 50 per cent.

A year later, the researchers are finishing a three-month study of 100 elderly people who have been doing both knee and hip extension exercises. The study confirms the original findings: “We’ve seen improvement not only in measured strength but also in stair climbing, walking speed, gait and balance, and the ability to rise up out of a chair,” says researcher. Meanwhile, a non-exercising control group showed no gains and even a slight decline in walking ability.

The same movements that were used in the study can be done at home, using ankle weights. Begin with a weight of anywhere from one to five pounds, and add weight as your legs get stronger. Do each exercise one leg at a time. Each repetition should take six seconds – three going up and three going down.

LEG EXTENSION. Sit on a sturdy, hard-backed chair and slide back so that edge of the chair fits into the crook of your knee. Straighten your leg until it’s parallel to the floor. Do 10 repetitions for each leg.

HIP EXTENSION. Stand upright while holding on to the back of a chair with one hand. Lift the opposite leg slowly backward and upward from the hip as far as possible, keeping the knee straight. Do 10 repetitions for each leg.

Sure, we all know that a bracing walk makes us feel good. But, over recent years, scientists have found that the active lifestyle does as much for the brain – in fact, the whole nervous system – as it does for the circulatory system. And that’s saying a lot.

A powerhouse review of research on exercise and psychology has just come from Canada. Analyzing no less than 81 different studies, the researchers report that in 56 cases (70 per cent), significant improvement in mental state was associated with fitness.

In another study, researchers at the Veterans Affairs Medical Center and Baylor College of Medicine in Houston found that regular exercise improves blood flow to the brain, checking the risk of stroke and some kinds of dementia. The study monitored cerebral blood flow in 90 men and women for four years. All the subjects were ages 65 to 70. Thirty were still working, 30 were retired buy physically active – exercising several times a week – and 30 were retired and inactive. Tests showed that on average the active retirees had the highest cerebral blood flow and the inactive retirees has the lowest. A similar pattern emerged when the researchers tested the volunteers’ mental capacities: Active retirees scored highest, workers second, sedentary retirees lowest. Active non-workers scored better than the still-working group, the investigators conclude, because most of the workers were probably sedentary “desk jockeys.”

“Our findings show just how important exercise is in avoiding strokes and neurological deterioration,” says John S. Meyer, M.D., professor of neurology at Baylor. “Walking, tennis, swimming, golf, gardening or any other daily exercise is a good idea at any age.”

All this is just a taste of what exercise can do for the most important organ in your body – your brain – regardless of age. At Scripps College they found that highly active people aged 55 to 91, compared to same-age folks who get little exercise, perform better in reasoning tests, reaction-time tests and memory tests. At the V.A. Medical Center in Salt Lake City, 55 to 70 year-olds who practiced what we call “speed walking” improved their memory, reaction time and creativity as well. Two other research centers have shown that senior-age exercisers have a better sense of balance, while Johns Hopkins researchers report that older men who are fit even have a much better sense of taste.

It seems the entire nervous system, from taste buds right upto a taste for intellectual pleasures, does better when we exercise. That’s something to think about!