7 Most Effective Variations On The Curl 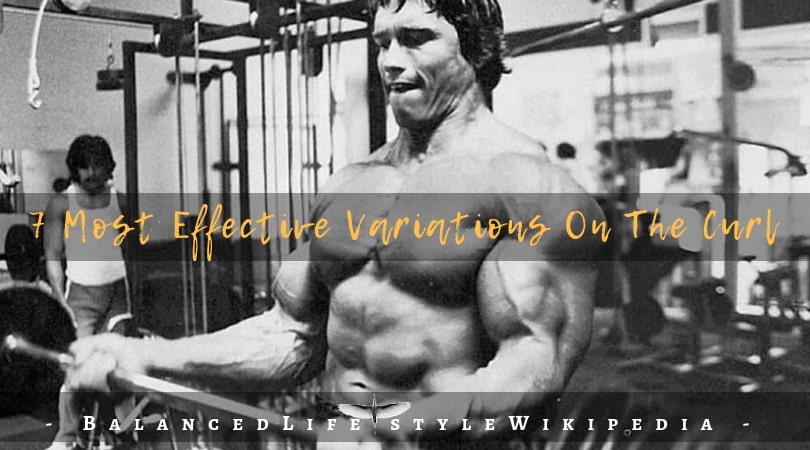 Big arms are the mark by which recreational lifters and professional bodybuilders inevitably make comparisons. In fact, they have their own lexicon: guns, cannons, firearms. Heck, can you even name the pro bodybuilder with the biggest chest, or quads? Probably not, but I’ll bet you can visualise your favourite’s heavy artillery. In my experience, better gains can come from training smarter rather than relying solely on effort and sometimes blindly emulating the programmes of the genetically blessed. After reviewing some of the concepts inherent in smart biceps training, I’ll point out which are the best exercises and how to include them in your routine.

This is the classic mass-and-strength builder, which hits all three of the major arm flexors (brachialis, lateral and medial biceps), but the medial head will feel most of the emphasis. Go heavy but be strict.

TIP: Keep your shoulders down and back, chest high and focus on the range of motion from 15-115 degrees of flexion. Keep your elbows at your sides to better isolate the muscle, and use a smooth, controlled motion. Use an EZ-bar, with an outer camber grip, if the straight bar causes forearm pain.

When you use heavy weight, this exercise can stimulate serious growth! This movement can also be done seated, which reduces body English and really forces you to use good form. Supinate whenever you can during curling movements; it’s the most natural way to curl and provides the most stimulation to the muscles involved in elbow flexion.

TIP: Start with the dumbbells in a neutral position at thigh level and bring them up as far as possible, slightly rotating your wrists as you curl the weight.

This is one of the better-kept secrets of bodybuilders who have really huge arms. Essentially, this movement combines some of the best elements of both barbell and dumbbell exercises, involving all three of the major arm flexors, with particular emphasis on the biceps brachii.

TIP: Begin with your hands at your thighs and your palms facing in (neutral grip). As you raise the weight, slowly supinate your wrists so that your palms face your body at the top of the movement. Keep your elbow close to your body throughout.

The lower the incline, the greater the stretch on the upper biceps. If you typically rotate your wrists during this movement, once in a while try instead to maintain a neutral position throughout the range of motion. This puts incredible stress on the brachialis and lateral head of the biceps, while involving the medial head to a lesser degree.

TIP: Curl the dumbbells simultaneously, keeping your head back against the bench and elbows back as best as possible. Supinate and squeeze each contraction as forcefully as you can.

This peak-contraction exercise builds both the brachialis and biceps.

TIP: Keep your elbow squarely against your inner thigh. You can also use a supination movement here by starting with your hand in a neutral position.

The ultimate in strict curls and one of the best biceps-builders. Keep your upper arm perpendicular to the floor by reversing the direction of the bench. For a different feel, try using a barbell, EZ-bar, a cable and dumbbells.

TIP: With a barbell, use a slightly-wider-than-shoulder-width grip. For those last two reps, let your wrists extend back at the bottom and then begin by flexing your wrists to give the bar a little extra momentum.

Providing the optimal position for developing the brachioradialis, neutral-grip hammer curls with dumbbells or cable attachments (such as the rope) put the finishing touch on a biceps workout.

TIP: Keep your upper arms by your sides and hold the peak contraction for a count. Pump out partial reps at the end of your set to super-fatigue the muscle.

TO CHEAT OR NOT TO CHEAT

Using momentum to accomplish a lift deserves mention because I see so much of it in arm training. Cheating does have a place in arm development, but probably not for beginners or intermediate trainers because it’s difficult to do correctly and effectively. When you cheat, you’re by design exceeding the “normal” (concentric) strength limits of the muscles, and the movement is performed ballistically with less stability of the entire torso and shoulder girdle.

Cheating increases your risk of injury and may reduce target muscle overload. Many other equal or superior methods increase overload and exercise intensity. If you cheat, use only enough swing to help you get through the sticking point when you’d otherwise be unable to, and always lower the weight slowly to emphasis the eccentric portion of the rep.